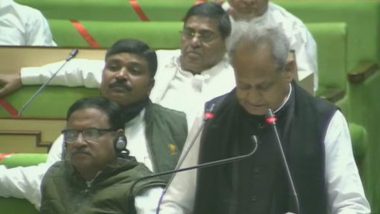 Gehlot, who also holds the finance portfolio, announced free distribution of sanitary napkins for girls, and said that the agriculture Budget will be announced separately from next year.

The other significant announcement made by the Chief Minister was of bringing in a Universal Health Coverage worth Rs 3,500 crore for all residents of Rajasthan under which each family will get an insurance benefit of Rs 5 lakh by paying an annual premium of Rs 850.

He also announced the implementation of the Rajasthan Model of Public Health under which the Right to health Bill will be implemented.

He further made declaration for bringing in the film tourism promotion policy which will be implemented to promote Rajasthan as a film destination. Rs 500 crore was announced to boost tourism in the Budget.

The deferred salaries of state government employees shall also be reimbursed, he added and said that mobile vet service will be started on 108 model.

Also, he announced a 10 per cent reduction in the DLC rates. The stamp duty on the property up to Rs 50 lakh has also been reduced from 6 to 4 per cent.

(The above story first appeared on LatestLY on Feb 24, 2021 04:00 PM IST. For more news and updates on politics, world, sports, entertainment and lifestyle, log on to our website latestly.com).