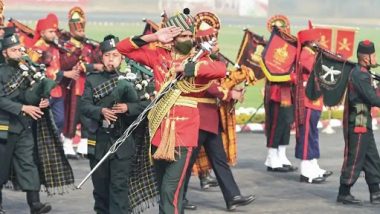 New Delhi, January 13: The Republic Day Parade 2021 will feature as many as 321 school children and 80 folk artists in cultural programme. According to a government release, school children from four Delhi schools and Folk artists from East Zonal Cultural Centre, Kolkata  will take part in the cultural programme during the Republic Day Parade. The celebrations will be held at Rajpath in New Delhi on January 26, 2021. The number of participating children and folk artists have been cut down to 400 this year, compared to more than 600 last year, in view of the COVID-19 restrictions. Republic Day Parade 2021 To Be Shorter, Government To Reduce Number of Visitors in View of COVID-19.

During a press preview held on January 13, 2021, the young participants expressed their happiness to be part of Republic Day Parade. They said, they were overwhelmed with a sense of pride as they have got a chance to showcase their talent before important dignitaries on Rajpath. The annual Republic Day Parade displays India's military might, rich cultural diversity and socio-economic progress.

(The above story first appeared on LatestLY on Jan 13, 2021 09:39 PM IST. For more news and updates on politics, world, sports, entertainment and lifestyle, log on to our website latestly.com).