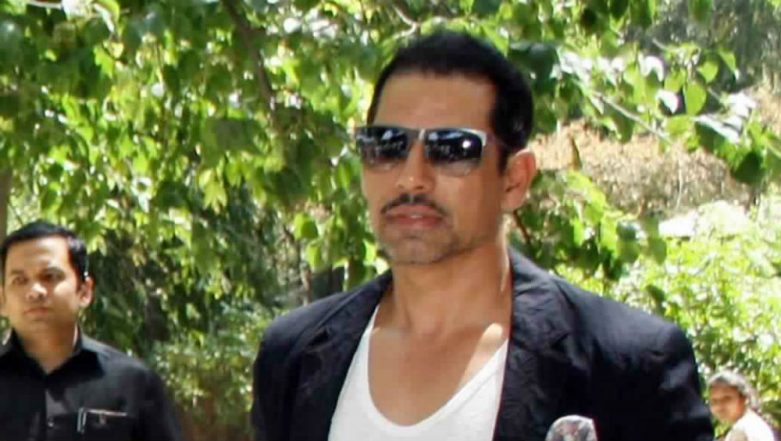 New Delhi, February 20: Robert Vadra, who skipped the Enforcement Directorate (ED) questioning a day ago citing poor health on Wednesday deposed before the agency in connection with a money laundering case. He arrived at the ED's Jamnagar office here at 10.30 a.m. On February 16, a Delhi court had extended Vadra's interim bail till March 2.

Vadra, who is the brother-in-law of Congress President Rahul Gandhi, has been questioned thrice by the directorate for over 24 hours in connection with the case on February 6, 7 and 9. The case relates to the ownership of undisclosed assets abroad worth 1.9 million pounds, allegedly belonging to Vadra, Congress General Secretary Priyanka Gandhi's husband. Money Laundering Case: Robert Vadra Skips ED Summon for Questioning, Cites Poor Health.

Delhi: Robert Vadra arrives at Enforcement Directorate (ED) office for questioning by ED in money laundering case linked to purchase of his London based property. pic.twitter.com/R9tbJdEFwz

He was also questioned on February 12 and 13 by the ED in Jaipur in connection with a Bikaner land deal case. The ED on February 15 had attached Vadra's Sukhdev Vihar house in Delhi, a a property worth Rs 4.43 crore. The house was in the name of Vadra's company Sky Light Hospitality Private Limited.

On February 2, the court had granted Vadra interim bail till February 16 and asked him to join the investigation on February 6. The ED had lodged a money laundering case against Vadra's employee Manoj Arora after his role came up during the the Income Tax Department probe in a 2015 anti-black money case involving absconding arms dealer Sanjay Bhandari.

Arora, an employee of Skylight Hospitality, was aware of Vadra's overseas undeclared assets and was instrumental in arranging funds, the ED had alleged.