The school managements were been trying to mitigate the whole situation till date. However, due to lack of funds, the schools are not able to bear the running costs and pay salaries to their staff, it said. 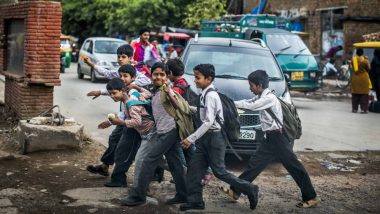 Jaipur, November 2: The forum of private schools in Rajasthan, including CBSE, Rajasthan board and missionary schools, has called an indefinite mass strike from November 5 onwards, saying the seven-month tussle between the schools and the parents of the students over fees has taken a serious turn.

In a press conference called on Monday, the forum said that the private schools have now entered into severe financial crisis, due to which they are compelled to close down.

The school managements were been trying to mitigate the whole situation till date. However, due to lack of funds, the schools are not able to bear the running costs and pay salaries to their staff, it said. Students to Get Rs 11,000 From Government to Pay Their School and College Fees Amid COVID-19 Pandemic? PIB Reveals Truth Behind Fake Post.

The forum requested the Chief Minister to step in and assist them in these tough times. It said that since the last seven months, the teachers have been conducting online classes for students, but it has now become impossible to pay slaries to the staff and meet the daily expenses of the schools.

School owners have requested the authorities to keep the court judgement dated September 9 intact, so that the parents are clear with regard to the fees to be paid before Diwali or else the government should provide some relief fund to the schools.

The Rajasthan High Court on September 9 had issued direction to the schools to collect 70 per cent of tuition fees.

However, recently, the state government had issued orders that CBSE schools and the Rajasthan board should reduce the tuition fees by 30-40 per cent in accordance with the reduced syllabus. Manish Sisodia, Social Entrepreneur Anshu Gupta Interact With Students of Delhi Govt Schools Under Entrepreneurship Mindset Curriculum.

The forum said that these recent orders are creating a lot of dilemmas and have ambiguities. The delay is badly affecting 50,000 schools and 11 lakh employees. If things linger on further, then against their wishes the schools will be forced to close indefinitely from November 5 onwards, it said.

The call has been backed by the Progressive School Association of Rajasthan, Catholic Schools Group and School Shiksha Pariwar, among others.

(The above story first appeared on LatestLY on Nov 02, 2020 10:09 PM IST. For more news and updates on politics, world, sports, entertainment and lifestyle, log on to our website latestly.com).