The protesters have extended an invitation to the Prime Minister to come and celebrate Valentine’s Day- the day of love, with them on Friday. The protesters held posters that had the message, 'PM Modi please come to Shaheen Bagh' written on them. 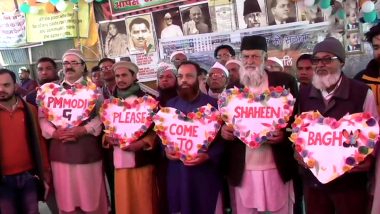 Delhi: Protesters at Shaheen Bagh hold heart-shaped cutouts with 'PM Modi please come to Shaheen Bagh' written on them. Protest against Citizenship Amendment Act has been going on at the spot. pic.twitter.com/nj4heo8IYM

On of the protesters was quoted in reports saying that, Prime Minister Modi or Home Minister Amit Shah or anyone else, can come and talk to them and if they convince them about whatever is happening is not against the Constitution, they shall end this protest. At the protest site,  school buses, ambulances and emergency vehicles are allowed hassle-free movement.

The protesters at Shaheen Bagh have pitched a tent on a main road linking Noida to south-east Delhi via the Kalindi Kunj bridge. In December 2019, protests against the CAA and the NRC unfolded at several places including Shaheen Bagh, Zakir Nagar, Jamia Nagar, Khureji Khas and other places in the national capital apart from other parts of India.

(The above story first appeared on LatestLY on Feb 14, 2020 01:31 PM IST. For more news and updates on politics, world, sports, entertainment and lifestyle, log on to our website latestly.com).