In 2005, India funded the project and the Indian water and energy company was then commissioned to complete the dam. In December 2015, the Indian government approved an estimated cost of about $290 million for the dam. It is the largest project of the Afghan government in the last 20 years. 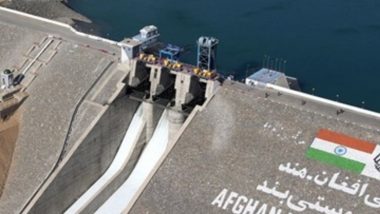 New Delhi, July 16: Taliban militants have fired dozens of mortars on the Salma Dam, a major source of electricity and irrigation in the Chesht district of Herat province in Afghanistan. Prime Minister Narendra Modi had jointly inaugurated the Afghan-India Friendship Dam (Salma Dam) with Afghanistan President Ashraf Ghani at Chist-e-Sharif in Herat province in Western Afghanistan in June 2016.

The Afghan National Water Authority has said that the agency had warned of catastrophic fallouts of the continued Taliban attacks. "Salma Dam will be destroyed if the militants continue to fire rockets," it said, adding that some of the rockets had landed near the dam, Afghanistan Times reported.

It said that a large number of Afghan citizens would suffer losses if the Salma Dam is damaged as the lives and livelihoods of many in eight districts of Herat province depend on the water reservoir of Salma Dam. It has called on the Taliban to stop its rocket attacks on Salma Dam, which is a "national asset and should not be damaged in the war". Taliban Issues Diktat Asking Local Religious Leaders for List of Girls Above 15, Widows Under 45 To Be Married to Their Fighters: Reports.

The agency called for protection and prevention of any attack on the dam, adding that if the dam is damaged, the residents of Chesht and Kahsan districts will be badly affected.

Taliban spokesman Zabihullah Mujahid, however, has denied any involvement, saying, "We did not shoot at Salma Dam at all." He also claimed that the security of Kamal Khan Dam is now in the hands of the Taliban. Salma Dam is located in the upper reaches of Harirod River near Chesht district. It is 107m high and 550m long.

The Afghan-India Friendship Dam is a multipurpose project planned for generating 42 MW power, irrigating 75,000 hectares of land, providing water supply and other benefits to the people of Afghanistan.

Salma Dam was a landmark infrastructure project undertaken by the government of India on river Hari Rud in Herat province. The project was executed and implemented by WAPCOS Ltd, a government of India undertaking under the Ministry of Water Resources, River Development and Ganga Rejuvenation.

In 2005, India funded the project and the Indian water and energy company was then commissioned to complete the dam. In December 2015, the Indian government approved an estimated cost of about $290 million for the dam. It is the largest project of the Afghan government in the last 20 years.

Technical and detailed studies of the dam were carried out in 1970s and its construction began soon after. After the rise of Left-wing governments and the outbreak of civil war, its construction got stalled for years. The dam has a 24m wide valve and three water reservoirs, each 10m long and 8m wide. Its water storage basin is approximately 22 km long and 3 km wide.

(The above story first appeared on LatestLY on Jul 16, 2021 11:57 PM IST. For more news and updates on politics, world, sports, entertainment and lifestyle, log on to our website latestly.com).