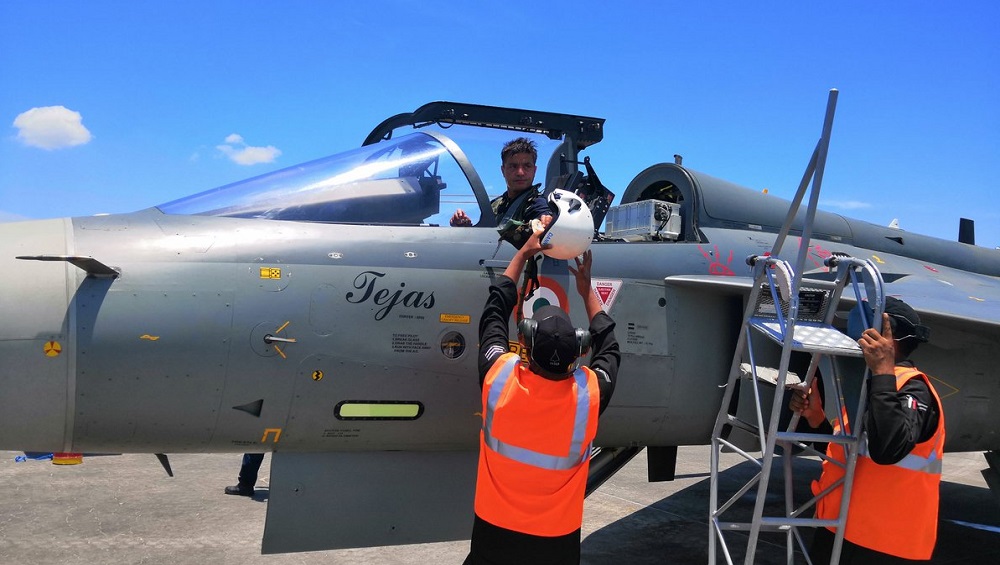 Panji, January 12: The naval version of the indigenously-built Tejas light combat aircraft on Sunday successfully took off from the "ski-jump" deck of the aircraft carrier INS Vikramaditya in a big leap in overall development of the jet. The ski-jump is the upwardly curved ramp on the deck of aircraft carriers designed to provide sufficient take-off lift for fighter jets. "The naval version of Tejas achieved another important milestone today by successfully undertaking the maiden ski-jump take-off from INS Vikramaditya," a Navy Spokesperson said. On Saturday, the aircraft made its first landing on the deck of INS Vikramaditya which was also a major milestone.

Both the landing and take off by the aircraft put India among a select group of nations having the capability to design such a jet which can operate from an aircraft carrier. The Defence Research and Development Organisation (DRDO) is involved in development of the naval variant of Tejas along with Aeronautical Development Agency (ADA), Aircraft Research and Design Centre of Hindustan Aeronautics Ltd, Centre for Military Airworthiness and Certification (CEMILAC) and CSIR among others. Naval Light Combat Aircraft Tejas Becomes First Indigenous Jet to Land on Aircraft Carrier.

"This landmark event demonstrates professional commitment and synergy between various agencies ADA, HAL, CEMILAC and Indian Navy in harnessing the potential of our scientists, engineers and naval flight testing community towards meeting the expectations of the nation," the Indian Navy tweeted.

After Saturday's successful landing of the aircraft on INS Vikramaditya, Defence Minister Rajnath Singh called it a "great event" in the history of Indian fighter aircraft development programme. The naval version of Tejas light combat aircraft is in development stage. The Indian Air Force has already inducted a batch of Tejas aircraft. Initially, the IAF had placed an order with the Hindustan Aeronautics Limited (HAL) for 40 Tejas aircraft. In 2018, the IAF issued the request for proposal (RFP) to HAL for the procurement of another batch of 83 Tejas at a cost of over Rs 50,000 crore.

Get access to India's fastest growing financial subscriptions service Moneycontrol Pro for as little as Rs 599 for first year. Use the code "GETPRO". Moneycontrol Pro offers you all the information you need for wealth creation including actionable investment ideas, independent research and insights & analysis For more information, check out the Moneycontrol website or mobile app.