Telangana Cabinet to Meet on May 5 to Decide COVID-19 Lockdown Extension, Relaxations

The Telangana government will decide on Tuesday over extending the lockdown, ending on May 7. The state cabinet, at its crucial meeting to be presided over by Chief Minister K. Chandrashekhar Rao, will discuss the issue and take a decision on extending the lockdown further in the wake of the Centre extending it for two more weeks from May 4 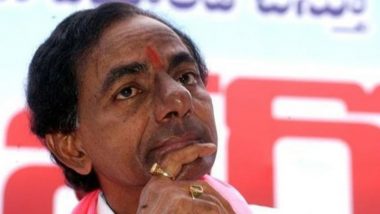 Hyderabad, May 4: The Telangana government will decide on Tuesday over extending the lockdown, ending on May 7. The state cabinet, at its crucial meeting to be presided over by Chief Minister K. Chandrashekhar Rao, will discuss the issue and take a decision on extending the lockdown further in the wake of the Centre extending it for two more weeks from May 4. Catch All the Live News and Updates Related to the Coronavirus Outbreak in India and Other Parts of the World.

The meeting to be held at the Chief Minister's official residence Pragati Bhavan from 2 p.m. is also expected to decide about the relaxations in non-containment zones. Like the Central government, the state is also likely to ease the curbs in green and orange zones. India's COVID-19 Recovery Rate Improves to 27.52%, Record 1,074 People Cured in Past 24 Hours.

However, no relaxations are likely in the red zone district. Last week, the Centre categorised Greater Hyderabad and five other districts as red zones. There are 18 districts in the orange zone and nine in the green zone.

There has been a significant decline in the number of positive cases in the state during the last one week but occasional spikes, mainly from Greater Hyderabad, remained a cause of concern for the government.

The Chief Minister has already asked the authorities to strictly enforce the lockdown in red zone districts, especially in containment areas.

At its previous meeting on April 19, the state cabinet had decided against giving any relaxations in the lockdown. It opted not to implement the guidelines issued by the Centre, giving relaxations for some economic activity.

After the cabinet meeting, the Chief Minister had stated that the decision was taken keeping in view the opinion of the majority of people. Rao claimed to have conducted a survey on his own by talking to a cross section of people to obtain their views.

This time too, the Chief Minister is said to have consulted not only his close confidants and senior leaders of Telangana Rashtra Samithi (TRS) but also sought the views of eminent people from various walks of life.

Indicating that some relaxations may be announced, the state government has permitted real estate developers to undertake construction activity by securing requisite material and engaging their workers.

The development came after Ministry of Home Affairs issued orders permitting 'in situ' construction in urban areas including those falling in red zones.

Official sources, however, say a decision on allowing other economic activities will be taken after analysing all aspects and their likely implications.

However, KCR is likely to take a decision only after studying the situation in other states including neighbouring Andhra Pradesh, where opening of liquor shops led to long queues and violation of social distancing and other lockdown norms.

Telangana has so far recorded 1082 Covid-19 cases, of which 545 have recovered and 29 have died. The number of active cases in the state stands at 508.

(The above story first appeared on LatestLY on May 04, 2020 09:05 PM IST. For more news and updates on politics, world, sports, entertainment and lifestyle, log on to our website latestly.com).