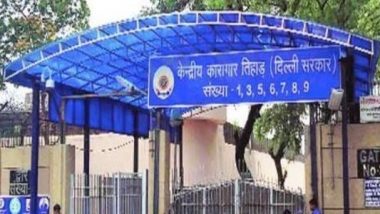 New Delhi, March 28: The Tihar Jail authority has released over 400 inmates to reduce overcrowding in prisons to prevent the spread of coronavirus, officials said on Saturday.

Earlier on Monday, the prison authorities had said they were planning to release around 3,000 prisoners to ease congestion in jails due the COVID-19 threat. Hardened or dangerous criminals will not be released, they had said.

According to the order, prisoners convicted or charged for offenses carrying jail terms of up to seven years can be given parole. Catch all the live updates of coronavirus outbreak in India and other parts of the world.

The Supreme Court had on March 23 directed all states and Union Territories to constitute high-level committees to consider releasing on parole or interim bail prisoners and undertrials for offences entailing up to seven-year jail terms to decongest prisons in the wake of coronavirus pandemic.