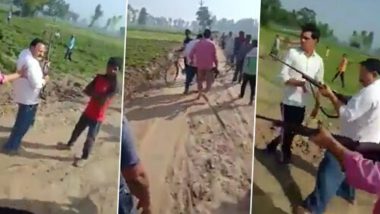 Uttar Pradesh, May 19: In a shocking incident, a video has emerged of a Samajwadi Party leader Chhote Lal Diwakar and his son Sunil being shot dead in Uttar Pradesh. According to reports, the incident took place in a village in Sambhal district. Chote Lal and his son had gone to inspect a road being built in the village using MNREGA funds.

A video of the incident has been shot and shared on social media. The video contains disturbing visuals and abusive language. The video was also shared by Samajwadi party leader Richa Singh who said that such a shocking incident took place in broad daylight and this throws light on the law and order situation in the state. Priyanka Gandhi Slams Yogi Adityanath Government Over Law And Order Situation, UP Police Say Crime on Decline.

In the video, it can be seen that both the men had an argument with two other men from the village who were carrying rifles.  There was a long argument with the two parties. Finally, the two men with rifles fired at the SP leader and his son. Both of them reportedly died on the spot. No arrests have been made with regards to the case.

(The above story first appeared on LatestLY on May 19, 2020 02:16 PM IST. For more news and updates on politics, world, sports, entertainment and lifestyle, log on to our website latestly.com).