Five policemen have been placed under suspension after a 22-year-old man allegedly killed himself at a police station on Tuesday night. 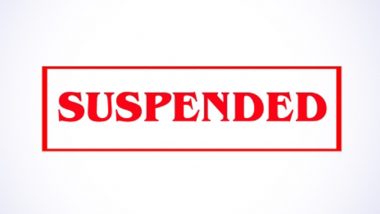 In a video statement released on Twitter on Wednesday, Kasganj Superintendent of Police Rohan Pramod Bothre claimed the man asked to use the toilet at the police station. When he did not return after a few minutes, the cops went inside the toilet. "He was wearing a black jacket and it appears he hooked the string, attached to the hood of the jacket, to a tap in the washroom and tried to strangle himself. He was brought out unconscious and taken to the hospital. He died within 5-10 minutes," Bothre said.  Bihar Hooch Tragedy: 10 Died After Consuming Spurious Liquor, SHO Axed for Dereliction of Duty.

The five policemen suspended in the case have been accused of 'negligence', according to a statement. Meanwhile, Altaf's father Chand Miyan, said, "I handed over my son to the cops. But I feel that my son has been killed." Another relative questioned how a person could hang himself from the water tap. "What is the height of the deceased and what is the height of the tap?" he asked.  Jashpur Durga Idol Immersion Incident: Two Cops Suspended; Accused Bablu Vishwakarma and Shishupal Sahu Arrested.

It may be recalled that in December last year, the Supreme Court had ordered that all police stations in the country and investigation agencies -- including the CBI, National Investigation Agency and Enforcement Directorate -- must install CCTV cameras with night vision and audio recording. The court said states have to install cameras with audio at all police stations.

(The above story first appeared on LatestLY on Nov 10, 2021 12:11 PM IST. For more news and updates on politics, world, sports, entertainment and lifestyle, log on to our website latestly.com).