A man in Uttar Pradesh dressed up as a woman to enter his girlfriend's house who was set to marry someone else. However, guests caught him. 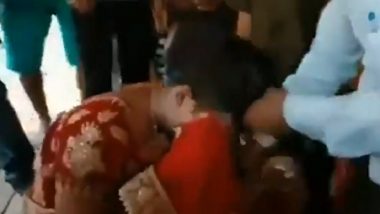 Bhadohi, June 4: Some people go above and beyond limits in order to seek love and end up doing crazy stuff. A man in Uttar Pradesh is one of such people. He dressed up as a woman to enter his girlfriend's house who was set to marry someone else. However, guests caught him after which he fled from the wedding. His intention remained unknown. The incident took place in Bhadohi district. A video of the man caught in bridal dress is going viral on social media. Assam Man Pretends To Be District Magistrate To Attend Girlfriend's Birthday Party Amid Lockdown, Lands in Jail.

The man disguised himself by wearing fake hair, wore a saree and applied makeup to look like a woman. He also had a sling purse hanging from his shoulder. He entered the girl's house where preparations for her marriage were going on. He requested people there to meet the bride. However, guests got suspicious of body language and gestures of the "woman". Man Accused of Rape in Madhya Pradesh Arrested, Was Hiding in Guise of Sadhu in UP Temple.

Soon, it turned out that the "woman" in saree is indeed a man. In the video, the man in saree is seen surrounded by a group of people with his fake hair removed. He is seen hiding his face with saree after being caught. According to a report by DNA, the man later fled from the spot with two of his friends who were waiting outside the bride's house.

#ViralVideo | UP man arrives at wedding dressed as bride, know why

The motive of the man is yet to be ascertained. The DNA report said a formal complaint was not lodged against the man. This is not a first such case. Recently, a man in Assam pretended to be a District Magistrate to travel during lockdown to meet his girlfriend.

(The above story first appeared on LatestLY on Jun 04, 2021 01:38 PM IST. For more news and updates on politics, world, sports, entertainment and lifestyle, log on to our website latestly.com).