Reportedly, the 20-year-old HIV-positive woman went into labour on November 22. However, the woman was left unattended by the medical staff who "refused" to touch her. 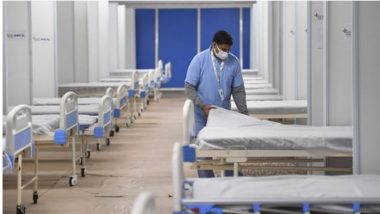 Firozabad, November 26: A nurse of a hospital in Firozabad has been suspended after an HIV-positive pregnant woman was left unattended at a medical college. Moreover, a letter has been sent to higher authorities recommending action against a junior resident doctor and a senior resident doctor over their alleged negligence, reported Times of India. Mumbai Medical Negligence: Toddler Dies After Being Administered Wrong Injection at Govandi Hospital, 4 Booked.

Reportedly, the 20-year-old HIV-positive woman went into labour on November 22. However, the woman was left unattended by the medical staff who "refused" to touch her. The woman then gave birth to a boy who died hours later. The woman's father said, "the private hospital was asking Rs 20,000 for normal delivery. After consulting the district field officer of National AIDS Control Organisation (NACO), I took my daughter to the medical where she lay on a stretcher and kept crying in pain for over six hours. Despite repeated requests, no doctor came to help her." Maharashtra: Seven Doctors From Yavatmal's Government Medical Hospital Booked for Medical Negligence Over Teenager’s Death.

After a delay of over six hours, when the matter reached senior officials, a nurse took her to the labour room. She gave birth to a baby boy who was having breathing difficulties. The staff did not allow the family to see the child and took him to a special newborn care unit. The next morning, the child died. She got the HIV infection soon after getting married, her family claimed.

(The above story first appeared on LatestLY on Nov 26, 2022 04:41 PM IST. For more news and updates on politics, world, sports, entertainment and lifestyle, log on to our website latestly.com).