A 23-year-old woman, seven months pregnant, ended her life by suicide after leaving behind a voice message for her brother. The Dalit woman, Pooja Jatav, who was married ten months ago, was allegedly being harassed for dowry by her husband and his family. 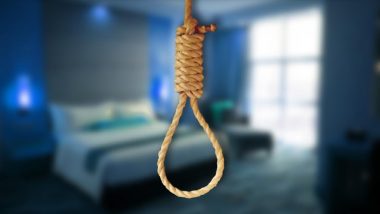 Bijnor, September 30: A 23-year-old woman, seven months pregnant, ended her life by suicide after leaving behind a voice message for her brother. The Dalit woman, Pooja Jatav, who was married ten months ago, was allegedly being harassed for dowry by her husband and his family. Her husband and father-in-law have been detained under the Dowry Prohibition Act after the brother informed the police about her message.

"Dear brother, you will not like what I am about to do. Please explain everything to mother and father. They should not worry. After I die, do not take even a spoon from this house and don't file a police case either," she is heard saying. Uttar Pradesh Shocker: Man Hangs Wife over Dowry, Arrested.

She further said, "When your sister is no longer around, there is no need to maintain any ties with this house. Don't do anything. You have done a lot for your sister, please do this as well. Don't take the car either. These are my last words to you. Do listen to me."

Pooja hanged herself to death in her in-laws' house on Tuesday. The autopsy report confirmed death by hanging.

Pooja's younger brother Raj Kumar said, "Pooja, a graduate from a family of farmers, had married Sanjeev Kumar, 24, last year and had been living with his family at Kamalpur village in Bijnor since then. Sanjeev Kumar had claimed to have a job with the railways but after marriage my sister found that he was jobless."

He further said, "Sanjeev and his family would torture her, forcing her to get more as dowry. We had already given a lot, including a car, to Sanjeev. It is not suicide. My sister was killed for dowry."

Bijnor SP Dharamvir Singh said that another brother of Pooja, Ranjan, to whom she had addressed her voice note, lodged a complaint at the Chandpur police station in Bijnor, on the basis of which Sanjeev and his father have been booked for culpable homicide and under the Dowry Prohibition Act. The dowry charges are being investigated.

In a similar incident in February, Ayesha Banu, also 23, had allegedly jumped into a river after months of harassment. Before she killed herself, she had recorded a video message for her family saying she was setting her husband "free". Her husband Arif Khan was booked for abetment to suicide.

(The above story first appeared on LatestLY on Sep 30, 2021 12:09 PM IST. For more news and updates on politics, world, sports, entertainment and lifestyle, log on to our website latestly.com).