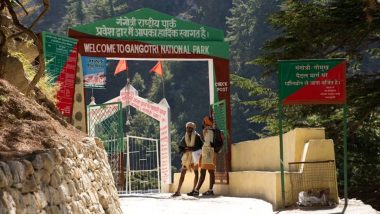 Dehradun, July 1: Chief Minister Trivendra Singh Rawat-led Uttarakhand government on Tuesday cleared the proposals for the construction of three strategically important roads to China border. For this, the government has cleared diversion of about 70 hectares of forest land in the Gangotri National Park. The decision was taken in the 15th State Wildlife Advisory Board meeting that took place on Tuesday.

Stating the importance of the three roads, Uttarakhand forest minister Harak Singh Rawat said that these roads are important from the national security point of view. He added that all the roads will connect the base camps of the Indo-Tibetan Border Police (ITBP) that have been set up near China border in Uttarkashi district. Among other details, Rawat also said that the road proposals include preserving the Gartang Gali road in the Uttarkashi district. China 'Strongly Concerned' over India's Decision to Ban 59 Chinese Apps Including TikTok.

The minister also accepted that construction of roads will impact forests and the environment. However, Rawat opined that the region is important from national security point of view and the roads would be used only by security personnel. He said that roads will improve the supply of food, ration, weapons for our soldiers. Meanwhile, the state government said that the road proposals would be sent to National Board for Wildlife for final approval. Environmentalists on the other side have stated that environmental impact should also be considered along with the strategical importance of the project.

(The above story first appeared on LatestLY on Jul 01, 2020 11:17 AM IST. For more news and updates on politics, world, sports, entertainment and lifestyle, log on to our website latestly.com).