Vadodara Man Seeks Divorce From Wife Because She Had Periods on Wedding Day, Alleges She Would Demand Unaffordable Luxuries

A man in Gujarat's Vadodara has sought a divorce from his wife because she had her periods on the wedding day. 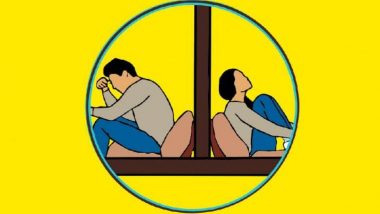 Vadodara, December 24: A man in Gujarat's Vadodara has sought a divorce from his wife because she had her periods on the wedding day. In his divorce petition, the man, who works in a private company, alleged that his wife had demanded money and "unaffordable" luxuries, and threatened to commit suicide if he did not fulfil her wishes. The couple tied the knot in the last week of January. BJP MP Saumitra Khan Breaks Down After Wife Joins TMC, Says Will Divorce Her.

The man, in his divorce petition, claimed that his wife had disclosed about her menstrual condition moments before they went to a temple for prayers after completing their marriage ceremony, according to a TOI report. He added that his "religious beliefs were violated" when his wife, a teacher, revealed that she had periods on the marriage day. Hyderabad Woman Given Triple Talaq Over Phone by American Husband.

The petition said soon after their marriage the woman had asked the man to give her Rs 5000 every month. She had asked him to install an air conditioner. When he refused saying he cannot afford, she left for her parents' house. Even after she was persuaded and brought back, she would keep going to her parents' house and not return for days, the man alleged. Period Sex: Women Must Dump Their Partner If They Refuse Sex During Menstruation, Says Expert! Know More About Intercourse During Periods.

The man further said when he once refused to give her money because he hadn't received salary, his wife had told him that she would have slept with 10 other men on the first night had she known that he could not afford the luxuries. He also alleged that she had lodged a false complaint against him and his family members.

(The above story first appeared on LatestLY on Dec 24, 2020 07:54 PM IST. For more news and updates on politics, world, sports, entertainment and lifestyle, log on to our website latestly.com).