An Air India flight to China on Guangzhou to Delhi sector, which was scheduled for October 23, has been postponed. 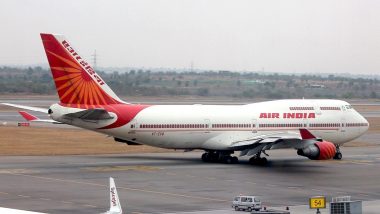 New Delhi, October 21: An Air India flight to China on Guangzhou to Delhi sector, which was scheduled for October 23, has been postponed. According to All India Radio (AIR), the flight, under the Vande Bharat Mission, was supposed to bring back Indian nationals stranded in China. However, due to technical reasons, the flight has been postponed, the AIR reported on Wednesday.

Instead, the Air India will operate a flight on Delhi-Wuhan-Delhi sector on October 30. Last week, the Indian embassy in Beijing said that Air India would operate two flights to China on Guangzhou to Delhi sector on October 23 and 30. The Indian mission had asked stranded Indians and OIC cardholders to register with the embassy or the consulates to avail any of these flights, under the Vande Bharat Mission.

The flights were supposed to facilitate the travel of Indians with valid work visas to return to China and take back those Indians wanting to return home. Last month, China allowed entry of certain categories of foreigners which enabled Indian employees of multinational companies to return to China. However, Beijing has not yet given nod for the entry of foreign students. Vande Bharat Mission Brought Back 20 Lakh Indians from Foreign Countries: ILO.

This is the 7th phase of Vande Bharat Mission which started on 1st October 2020. The Ministry of External Affairs in a statement said, as on 30 September, 16.45 lakh Indians have been repatriated through different modes of the Vande Bharat Mission. India has so far operated five Vande Bharat flights to China. The previous five flights flew to Shanghai, Guangzhou and Ningbo.

(The above story first appeared on LatestLY on Oct 21, 2020 09:20 AM IST. For more news and updates on politics, world, sports, entertainment and lifestyle, log on to our website latestly.com).