The incident was clearly captured on camera, violating all the rules. The video that went viral on social media, the car trespassed and entered the railway station and caused inconvenience to other passengers. 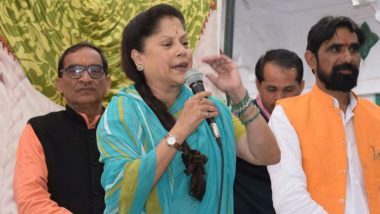 Bhopal, August 30:  In another case of VVIP culture, Madhya Pradesh Sports minister Yashodhara Raje Scindia’s car entered at the railway platform on Wednesday, despite police being present at the spot. According to a report by Times Now, the car was allowed to drive onto the platform to ensure that the Minister didn’t have to walk much. The incident that clearly violating all the rules, was clearly captured on camera. The video that went viral on social media, the car trespassed and entered the railway station and caused inconvenience to other passengers.

A close look at the video shows that a signboard on the gate at the railway platform declares that trespassers would be fined Rs 500 for violating rules. Reports inform that when the incident was brought to the notice of the state Sports Minister, she said that she was not aware of the rules. The Times Now report further informs that no action has been taken against the authorities for allowing a car to drive onto the platform.

Earlier this week, a video purportedly showing a man claiming to be Madhya Pradesh Chief Minister Shivraj Singh Chouhan's brother-in-law and warning traffic police not to fine him has gone viral on social media. Reports inform that the city police levied a fine on Rajendra Singh Chouhan, the man in the video.

According to a report by PTI, the video showed Rajendra Singh and a woman getting down from an SUV when stopped by police on Jail Road here and claiming that he was the husband of chief minister's sister, so the police should not fine him. Police subedar Dipankar Swarnkar recovered a fine of Rs 3,000 from him as the vehicle was not insured, Deputy Inspector General of Police Dharmendra Choudhary was quoted in the report.

(The above story first appeared on LatestLY on Aug 30, 2018 03:37 PM IST. For more news and updates on politics, world, sports, entertainment and lifestyle, log on to our website latestly.com).