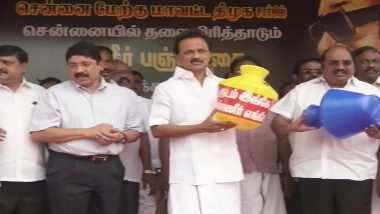 Visuals of the protest:

On June 21, the Tamil Nadu government accepted Kerala's help of 20 lakh drinking water. The decision was taken on Friday in a review meeting chaired by chief minister Edappadi K. Palaniswami. Earlier, some reports claimed that Palaniswami had turned down the help from Kerala. Chennai Rains: After 196 Days, First Showers Witnessed in Some Parts of City, #Chennairains Trend on Twitter.

Tamil Nadu is facing severe water crisis, particularly in Chennai as four of its reservoirs, the main source of drinking water in the city, turned dry. Rising temperature has also added to the woes of people across the state. On June 11, the Tamil Nadu government had also requested the Centre for sanctioning over Rs 5,000 crore for various drinking water supply schemes in the state.

(The above story first appeared on LatestLY on Jun 24, 2019 11:46 AM IST. For more news and updates on politics, world, sports, entertainment and lifestyle, log on to our website latestly.com).