The Supreme Court on Wednesday transferred all the FIRs lodged against suspended BJP spokesperson Nupur Sharma over her controversial remarks on Prophet Muhammad to Delhi Police. 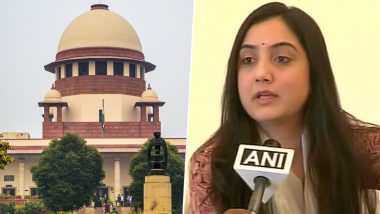 New Delhi, Aug 10:  The Supreme Court on Wednesday transferred all the FIRs lodged against suspended BJP spokesperson Nupur Sharma over her controversial remarks on Prophet Muhammad to Delhi Police.

The top court gave her the liberty to approach the Delhi High Court for quashing of the FIRs, and also declined to entertain a plea moved by the West Bengal government for a court-monitored SIT probe. Prophet Remark Row: No Coercive Action Should Be Taken Against Nupur Sharma, Directs Supreme Court

A bench comprising justices Surya Kant and J.B. Pardiwala ordered clubbing of all the FIRs registered across the country against Sharma, which will be probed by the Delhi Police.

The top court in the process brushed aside vehement opposition by the West Bengal government, which wanted its police to be part of the SIT with the Delhi Police or a court-appointed SIT.

The bench allowed Sharma to move the Delhi High Court seeking quashing of the FIRs lodged or to be lodged for her alleged remarks in the future.

It added that all the FIRs to be lodged in future in connection with her remarks will be transferred to Delhi Police.

The top court made it clear that protection from arrest to Sharma will continue in all pending and future FIRs. The bench also noted that an FIR has been registered by the Intelligence Fusion and Strategic Operations (IFSO) unit of Delhi Police, which is a specialised agency, and suggested that it should carry out the investigation.

Senior advocate Menaka Guruswamy, representing the West Bengal government, objected to the transfer of FIRs to Delhi Police by saying that the first FIR against Sharma was registered in Mumbai, and argued that the accused cannot be allowed to pick the jurisdiction.

Senior Advocate Maninder Singh, appearing for Sharma, said the top court's intervention is required, as his client has received life threats after the TV debate where she made the alleged remarks.

On July 19, the top court had ordered that no coercive action can be taken against Sharma in FIRs already registered and also in future FIRs in connection with her remarks.

The top court had said: "Meanwhile, as an interim measure it is directed that no coercive action shall be taken against Nupur Sharma pursuant to the impugned FIRs."

Sharma had moved the Supreme Court seeking stay on her arrest in the nine FIRs filed against her for her remarks on Prophet Muhammad and also sought clubbing/quashing of the FIRs with the FIR registered in Delhi.

On July 1, the top court had minced no words in slamming Sharma, whose remarks on the Prophet sparked a nationwide controversy. The top court had said that her loose tongue has set the entire country on fire and her irresponsible remarks shows that she is "obstinate and arrogant".

(The above story first appeared on LatestLY on Aug 10, 2022 05:54 PM IST. For more news and updates on politics, world, sports, entertainment and lifestyle, log on to our website latestly.com).