1975 Emergency Explained: Recalling What, Why and How of Indian Democracy's 'Darkest Phase' on Its 45th Anniversary 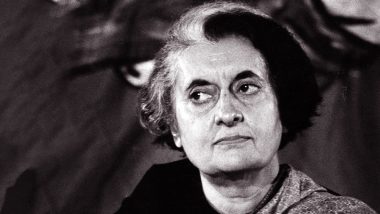 New Delhi, June 25: Emergency, also referred to as the "darkest phase" of Indian democracy, was imposed on this day, in 1975. The period that lasted for next 22 months witnessed the suspension of civil liberties, right to freedom of speech and expression, and curtailment of political rights. On the 45th anniversary of its proclamation, here's a brief explainer on the 1975 emergency.

How The Emergency Came Into Effect

The Indian Constitution is entailed with a special provision that mandates the government to suspend certain fundamental rights in special cases - which includes external aggression and internal disturbance (armed rebellion). The provision is included under Article 352.

When the nationwide agitation against the then Prime Minister Indira Gandhi gained pace, Jayaprakash Narayan - under whose leadership the protest was being steered - asked government employees and security officials to join the protest.

This was used as a pretext by the then government to accuse him of calling for an armed rebellion against the state. Subsequently, the Union Cabinet recommended the imposition of national emergency under Article 352. Fakhruddin Ali Ahmed, the then President, approved the Cabinet's decision and the state of emergency came into effect from June 25, 1975.

Why Was The Emergency Imposed

According to the then ruling regime led by Indira Gandhi, "internal disturbances" which posed a threat to the state was the reason behind imposing the emergency. The Centre had aimed to crack down on widespread corruption and anarchic protests, while also targeted to smoothly execute the government's agenda.

But historians, analysts, free press and the then political Opposition claimed that the reason to impose the emergency was aimed at undemocratically prolonging the tenure of Gandhi's government.

While the nationwide agitation - under Narayan's "sampoorna kranti (total revolution)" call was already underway, an order by the Allahabad High Court served as the immediate trigger to the proclamation of emergency, historians recall.

The Allahabad HC bench, in an order issued on June 13, 1975, dealt a major blow on Gandhi as she was convicted of electoral malpractices in her election to the Lok Sabha in 1971 polls. Had the conviction been executed, she would had to vacate her parliament membership, and thereby lose the prime ministerial chair. As per the conviction order, she was also barred from contesting elections for next six years.

What Happened After Emergency Was Imposed

Arrests became arbitrary, with the police given the charge to take into custody anyone suspected to be part of the "internal disturbance". Warrants were not necessitated, redressal mechanisms were ineffective and vindictive action became common.

The day after emergency was imposed, the power supplies to printing press were choked. Those publications whose newspapers were published were barred from circulation.

In the days to come, the media was allowed to resume newspaper circulation but the tone and tenor of most of the press became pliable and pro-government, recall historians.

Among the prominent exceptions was The Indian Express which published blank editorials through the emergency period to mark its angst against the lack of press freedom. Editor of Express News Service Kuldip Nayar was also jailed for three months during the emergency period.

The state of most other media houses, which began to toe the government line, was encapsulated as follows by veteran politician LK Advani: "You (media) were asked to bend, but you began to crawl".

The emergency period also witnessed mass arrests of Opposition leaders and student activists from all parts of the nation. Most top rung and second rung leaders of the JP movement, including the protest's leader - Jayaprakash Narayan - were jailed during the emergency years on the charge of stoking public unrest.

Gandhi, however, also undertook reform measures by implementing the 20-point agenda to aid the "gareeb aadmi". This included the redistribution of land among eligible landless labourers and farmers, streamlining of banking sector and tackling graft.

The proclamation of emergency also allowed her to suspend the Lok Sabha for a year's period after the tenure of elected Lower House ended in 1976.

Gandhi was convinced that her reform measures have aided the poorest among the poor and those in lower strata of socio-economic ladder. Analysts claim that she was confident of being democratically elected again and decided to end the emergency on January 18, 1977.

The general elections were called for March, and all political detainees were released and provided less than two months to regroup and prepare for the elections. Despite the Congress being confident of a victory, the nation overwhelmingly voted against the ruling dispensation.

The Janata Party - a loosely stitched coalition of most anti-Congress forces - came to power. Morarji Desai, a former Congressman and foe of Indira Gandhi, was elected as the Prime Minister. The government lasted for less than three years and ultimately paved the way for the return of Gandhi to power.

(The above story first appeared on LatestLY on Jun 25, 2020 06:59 AM IST. For more news and updates on politics, world, sports, entertainment and lifestyle, log on to our website latestly.com).