The series of Income Tax raids on the close aides of Chhattisgarh CM Bhupesh Singh Baghel have unsettled the state bureaucracy and increased tensions between the ruling Congress and the Opposition BJP. Congress had accused the BJP-led Central government of vengeful politics. 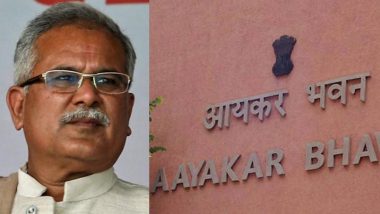 New Delhi/Raipur, February 29: The series of Income Tax raids on the close aides of Chhattisgarh Chief Minister Bhupesh Singh Baghel have unsettled the state bureaucracy and increased tensions between the ruling Congress and the Opposition BJP. The IT Department had conducted the raids on more than 50 locations on premises of senior IAS officials, Deputy Secretary to the Baghel and the Mayor of Raipur on Thursday and Friday.

According to several media reports, the IT raided around 50 locations in Chhattisgarh, without even informing the Chief Minister or the state police. While the tax were conducted with the assistance of CRPF personnel. Following the raids, CM Baghel and other ministers of Congress accused the Bharatiya Janata Party-led Central government of vengeful politics. Thalapathy Vijay Income Tax Raid Controversy: Kollywood Superstar Joins the Sets of Master in Neyveli?

With the political arena unsettled, and both BJP and Congress accusing each other, CM Baghel called a meeting of the state Cabinet. Later on Friday, along with state ministers, Baghel went to Governor Anusuiya Uikey to submit a letter and asked him to intervene. Baghel even called the raids unconstitutional, and the letter submitted by him and other ministers stated, "The alleged I-T employees have been raiding properties belonging to senior officers including people working in the CM’s office." The CM said, as ANI quotes, "We have never stopped Income Tax raids because earlier there used to be prior information but now there is no information. This is political revenge".

It is to be known that the raids were conducted by the IT after the state government's Economic Offences Wing registered an FIR against former principal secretary Aman Singh, who is considered a close aide of former Chief Minister and BJP leader Raman Singh. Meanwhile, CBDT spokesperson Surabhi Ahluwalia said, as Indian Express quoted, "We have done the groundwork and have reasons to investigate these premises. The details of the case will be made clear later."

(The above story first appeared on LatestLY on Feb 29, 2020 11:15 AM IST. For more news and updates on politics, world, sports, entertainment and lifestyle, log on to our website latestly.com).