The coronavirus outbreak has appeared to have created a rift within the Bharatiya Janata Party (BJP) in Karnataka. 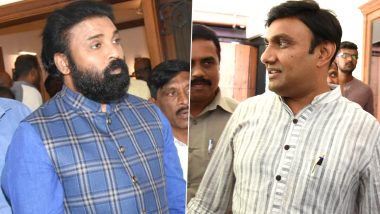 Bengaluru, March 26: The coronavirus outbreak has appeared to have created a rift within the Bharatiya Janata Party (BJP) in Karnataka where Chief Minister BS Yediyurappa reportedly first irked state health minister B Sriramulu and later medical education minister Dr K Sudhakar. It all began on Tuesday when Yediyurappa abruptly divested Sriramulu of all coronavirus related matters and handed over the responsibility to Sudhakar. Coronavirus Outbreak Live News Updates on March 26.

Soon sections of media started attributing Yediyurappa's decision to Sriramulu's "incompetence". An irate Sriramulu immediately reached the Chief Minister's residence with his resignation letter in hand. According to a report by News18, a heating argument took place between Yediyurappa and Sriramulu after which the Chief Minister withdrew his order. But, this made Sudhakar angry, leading to further conjecture. Coronavirus Lockdown Violators Punished by Police in UP, Karnataka.

Sudhakar, a Congress turncoat, is emerging as a young leader in the Karnataka BJP. The MBBS and two-time MLA was directed by Yediyurappa to help Sriramulu in handling the coronavirus crisis. Using his medical experience, Sudhakar managed to put up a creditable show and even stole the limelight during meetings and media briefings. This apparently did not go well with Sriramulu who is already sulking for deputy CM's post.

"He (Sriramulu) was upset, not because of the divestment of a big responsibility. He was upset over the manner in which it was done. He feels that it was done with the intention of sidelining and making him look bad in the eyes of the public in the time of coronavirus outbreak," a close aide of the health minister told News18. The Yediyurappa camp maintained that Sriramulu is an asset to the BJP.

(The above story first appeared on LatestLY on Mar 26, 2020 09:58 AM IST. For more news and updates on politics, world, sports, entertainment and lifestyle, log on to our website latestly.com).