AAP's key candidate Atishi is leading from Kalkaji with a margin of over 600 votes.

Kartar Singh Tanwar of Aam Aadmi Party is leading from Chhatarpur with a margin of over 5,000 votes.

Aam Aadmi Party's Ajay Dutt is leading from Ambedkar Nagar with over 5,000 votes. 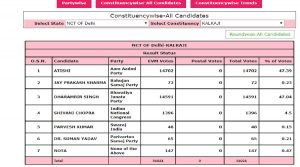 New Delhi, February 11: The counting of votes for the Delhi assembly elections 2020 will begin today at 8 am, and the early trends are expected by 9 am. The results of Delhi polls will be declared by the Election Commission by today evening. Catch live updates on election results of Chhatarpur, Deoli, Ambedkar Nagar, Sangam Vihar, Kalkaji, Tughlkabad extension and Badarpur assembly segments of South Delhi Lok Sabha constituency here on LatestLY.  Delhi Assembly Elections 2020: Hits And Misses of Arvind Kejriwal's AAP.

The remaining three assembly seats – Kalkaji, Tughlakabad and Badarpur of the South Delhi Lok Sabha also witnessed a triangular contest between the AAP, Congress and the BJP. The Arvind Kejriwal led-party filed sitting MLA Sahiram Pehelwan from Tuglakabad, while it replaced its sitting MLA from Kalkaji and Badarpur. From Kalkaji it fielded Atishi and Ram Singh Netaji from Badarpur. The Congress gave tickets to Pramod Kumar Yadav, Shubham Sharma and Shivani Chopra from Badarpur, Tuglakabad and Kalkaji respectively. The Saffron party nominated Ramvir Singh Bidhuri from Badarpur, Vikram Bidhuri nephew of the incumbent South Delhi MP Ramesh Bidhuri from Tughlakabad and Dharamveer Singh from Kalkaji.

All the exit polls declared by several media houses predicted AAP’s victory, while the BJP is being said to be at a distant second spot. According to all the exit polls, the Congress would put up a dismal performance. The grand old party would fail to bag more than three seats. The voting for the 70-member Delhi assembly took place on February 8.