IAS Officer in Madhya Pradesh Slams 'System' Over His Constant Transfers, Gets Notice After Chats on Signal Leaked 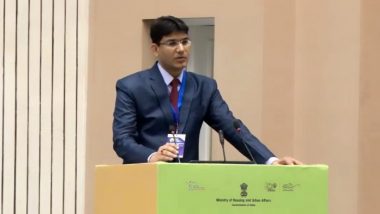 Jangid, who was recently transferred from the post of additional collector of Barwani district within 41 days of his posting to additional mission director at Rajya Shiksha Kendra, wrote: "Interestingly while those who mint money from all kinds of mafia, get transferred from field to field. And those with IMPECCABLE INTEGRITY get thrown to Secretariat on transfer." The bureaucrat has approached the chief secretary Iqbal Singh Bains seeking inter-cadre deputation to Maharashtra citing personal reasons. Ex-IAS Officer Anup Chandra Pandey Takes Charge as Election Commissioner.

"Stability of tenure in Madhya Pradesh and the joke of an institution called Civil Services Board. I will come out with a book post retirement and hopefully bring the facts before everyone to see. Right now, my hands are tied by the bloody conduct rules," Jangid wrote in another post. "…of course, who's who in bureaucracy are mere Nero's Guests these days. Same thing happened in Shahdol when I was SDM. I told Collector that he's a weak Collector, which he bloody was. And I was removed on that ground," he added.

Jangid has been served a notice and is asked to respond within a week by the state government. While the Congress alleged that the IAS officer was transferred from Barwani for exposing corruption in purchase of medical equipment during the coronavirus pandemic, state minister Vishvas Sarang said transfers and postings are routine administrative procedure.

"The same officer was transferred even during the Congress regime, so how has he become so dear to the Congress now? No officer is bigger than the system. Every officer has to abide by civil services conduct rules, which have been violated by the concerned officer," Sarang told NDTV. The 2014 batch IAS officer was first posted as SDM Vijaypur (Sheopur district). He was attached to the Secretariat a few months later. He had since then been transferred over and again.

(The above story first appeared on LatestLY on Jun 17, 2021 08:31 AM IST. For more news and updates on politics, world, sports, entertainment and lifestyle, log on to our website latestly.com).