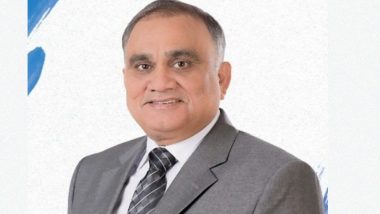 The poll panel has to oversee the next set of crucial Assembly elections in Uttar Pradesh, Punjab, Goa, Manipur, and Uttarakhand next year.

The 62-year-old will demit office in February 2024 on attaining the age of 65 years, according to the age criteria for Election Commissioners, just ahead of the likely announcement of the 2024 Lok Sabha polls.

Born on February 15, 1959, Pandey was a 1984 batch, UP cadre Indian Administrative Service officer. During his 37 year service, he has held key posts at both the Centre and the state level.

Prior to joining the Election Commission, Pandey was serving as a member of the National Green Tribunal Oversight Committee, Uttar Pradesh.

Pandey was handpicked by Uttar Pradesh Chief Minister Yogi Adityanath to head the state bureaucracy as Chief Secretary on June 28, 2018, and retired in August 2019. Under his watch, the state organised the Kumbh Mela at Prayagraj, and the Pravasi Bhartiya Diwas at Varanasi in 2019.

As the state's Additional Chief Secretary, Finance, he oversaw the successful designing, planning and implementation of the state's Farm Loan Waiver Scheme.

Pandey has held diverse portfolios during his deputation at the Centre, serving as Additional Secretary, Defence, and Joint Secretary, Labour and Employment.

He also represented the country at various international forums like G20 and International Labour Organisation. He was also Director in Ministry of Health and Family Welfare and the Department of Consumer Affairs.

Pandey has a keen interest in writing and has authored a book titled "Governance in Ancient India", exploring the evolution, nature, scope, functions and related aspects of Indian civil service from the Rig Vedic period to 650 AD.

(The above story first appeared on LatestLY on Jun 09, 2021 05:58 PM IST. For more news and updates on politics, world, sports, entertainment and lifestyle, log on to our website latestly.com).