If Talks Take Place with Pakistan, It Will Be on PoK: Defence Minister Rajnath Singh 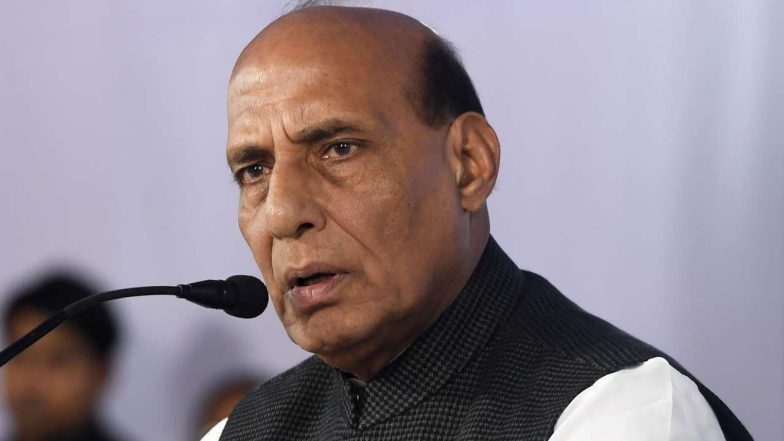 Singh said this while addressing a public rally ahead of the flagging off the BJP's Jan Ashirwad Yatra for the October assembly polls in Haryana. On the scrapping of the provision granting a special status to Jammu and Kashmir under Article 370 of the Indian Constitution, Singh said the decisions had sent jitters to Pakistan and it became a cause of concern for them. Kashmir is Nuclear Flashpoint, Says Pakistan Army on Rajnath Singh's 'No First Use' Policy Remark.

"Now it (Pakistan) is knocking every door and approaching various countries for help. Have we committed any crime? And they are trying to threaten us. However, America, perceived to be the most powerful country in the world by people, has snubbed Pakistan, telling them to initiate a dialogue with India," he said.

On what issue should we have talks and why, the defence minister asked in the presence of Haryana Chief Minister Manohar Lal Khattar, Union ministers Narendra Singh Tomar, Krishan Pal Gurjar and Rattan Lal Kataria besides a number of cabinet ministers and BJP MLAs from the state. Rajnath Singh said people in Pakistan say there should be talks between India and Pakistan.

"About what should we talk? What's the issue on which there should be talks? Why there should be a talk? If there would be any talk with Pakistan, it would happen only when Pakistan stops supporting terror from its soil," he asserted.

Singh said for the present government, India's respect, pride and prestige was above all and they were committed to this and it was not any election stunt.

He also accused Pakistan of wanting to destabilise and weaken India through terrorism.

"At times, Pakistan wants to break our country by using terrorism. But our Prime Minister has shown that he has a 56-inch chest. He took a decision to give a befitting reply after the Pulwama terror attack as our Air Force carried out the Balakot strike," he said.

Pakistan Prime Minister Imran Khan, who remained in denial on Balakot strike, had recently said that India was planning a bigger strike than Balakot which meant he had admitted that the Balakot air strike took place and a large number of terrorists were eliminated, the defence minister said. Hitting out at the Congress Party over the purchase of Rafale jets, Singh said, "Had we got Rafale, our Air Force need not have gone to Balakot. We could have eliminated those terrorists from our land itself."

He said the government would purchase the Rafale jets soon. The defence minister also highlighted the development works undertaken by the government during its second term. "We have carried out a number of development works, but we have not left issues which concern nation's pride. Whatever we had said in our election manifesto, we are committed to fulfil that, be that the revocation of Article 370," Rajnath said.

The Union minister further stressed that the Opposition used to say if anybody touched Article 370, the country would be divided and the BJP won't be able to come to power. "I want to say it clearly that the BJP does not do politics for forming government. We do politics of nation building. Under no circumstances, we will allow the prestige of our country be tarnished," he added.

On the promises made in their election manifesto, Singh said, "Our Prime Minister keeps telling us to remain committed to the promises made in the manifesto. 'Pran jaye par vachan na jaye'. We do not go back on what we have promised. We scrapped provisions of Article 370 and 35-A for J&K's interests, keeping in view the future of its youth…," he said. Rajnath also said their party did not indulge in the politics of dividing Hindu and Muslims.

"Our thinking is that the two are brothers. Those who indulge in the vote-bank politics divide the communities in a bid to capture power," the BJP leader said while addressing the rally in Kalka. Singh appealed to the people of Haryana to bring back the Manohar Lal Khattar-led government by helping the BJP realise its target of winning 75 seats in the 90-member state assembly.