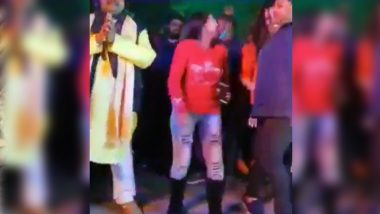 Patna, December 16: Janata Dal (United) legislator in Bihar, Gopal Mandal, whose video dancing with female dancer had gone viral, defended his action, dragging God into the row. There is nothing wrong in dancing as even God used to dance, Gopal Mandal has said. Mandal has been facing flak from the opposition parties after his video shaking a leg with female dancers surfaced on social media. Pranav Singh 'Champion', Suspended BJP MLA Caught Brandishing Guns At House Party While Dancing to Songs.

"Who does not dance? Even God used to dance," Mandal, who represents Gopalpur constituency, was quoted by India Today as saying. The JD(U) legislator refused to accept that he was dancing with female dancers. However, in the viral video, he was seen dancing along with other dancers, India Today reported. Mandal said he went on the stage just to click a selfie and had refused to dance despite the insistence by many. Karnataka BJP MLA Masala Jayaram Violates Coronavirus Lockdown, Throws Lavish Birthday Bash With Over 100 Attendees (Watch Video).

"I had organised a programme in my area and called female dancers from Kolkata and Delhi. When the programme was going on I was being repeatedly asked to come on stage and dance but I refused. Later on, I was asked for a selfie and then I went on the stage and raised my hand but I did not dance," Mandal claimed.

The JDU leader has been at receiving end since the video had gone viral on social media. The Rashtriya Janata Dal (RJD) said that leaders of the ruling JDU-BJP coalition government have no "sanskar". Reacting to defence, the RJD tweeted: "He is the only person in the world who can click selfie without mobile phone."

(The above story first appeared on LatestLY on Dec 16, 2020 12:12 PM IST. For more news and updates on politics, world, sports, entertainment and lifestyle, log on to our website latestly.com).