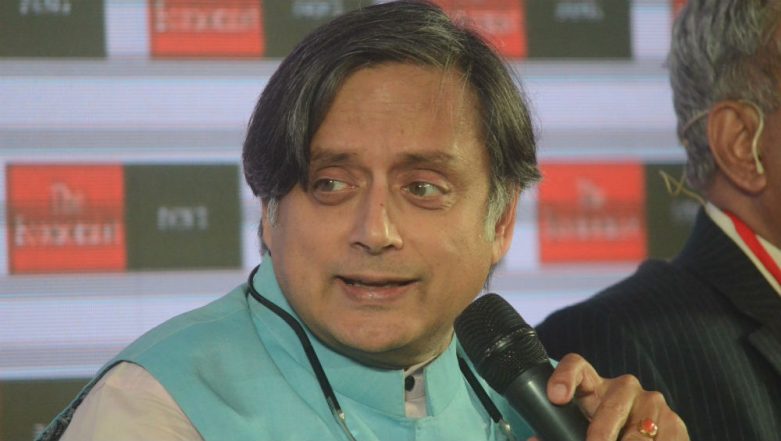 New Delhi, January 30: The BJP on Wednesday accused Congress MP Shashi Tharoor of insulting Hinduism by "ridiculing" the ongoing 'Kumbh' with "tactical support" of Rahul Gandhi. BJP leader and Union minister Smriti Irani attacked the opposition party after Tharoor tweeted a photograph of Uttar Pradesh Chief Minister Yogi Adityanath and his cabinet colleagues taking a dip at 'Sangam' in Kumbh and apparently took a dig at them.

"Ganga has to be kept clean and sins are also to be washed here. Everyone is naked in this Sangam. Hail mother Ganga," the Congress MP had tweeted in Hindi Tuesday, drawing an angry response from Irani. Noting that Kumbh is a festival of faith and a biggest symbol of Hindu beliefs, Irani told reporters that Tharoor's comments were tantamount to "religious slur" as she accused him of ridiculing the religious congregation. Shashi Tharoor Files Criminal Complaint Against Ravi Shankar Prasad for Calling Him ‘Murder Accused’.

"It is appalling and he has done it with tactical support of Rahul Gandhi," she said, claiming that the Congress president's silence amounted to his support to Tharoor's "insult" of the Hinduism. Tharoor has often made comments targeting Hinduism, she said. Hitting out at Gandhi, the minister said he allows his party leaders to attack the beliefs of Hindus but strategically wears 'janeu' (holy thread) when elections are round the corner.