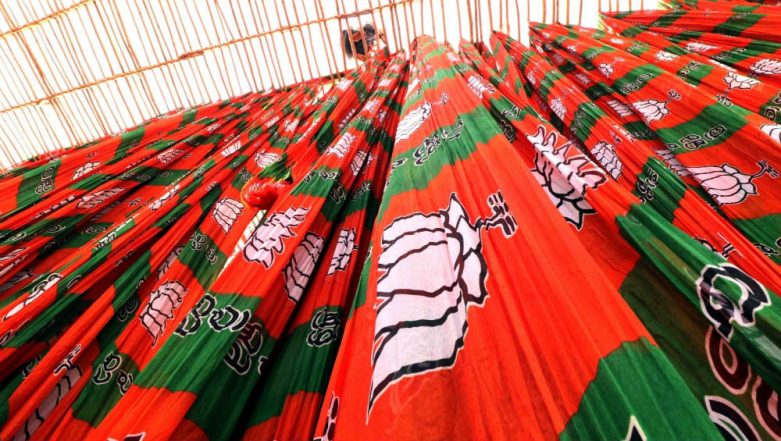 Dehradun, May 23: The ruling Bharatiya Janata Party (BJP) in hill states Uttarakhand and Himachal Pradesh is leading with a good margin on all the Lok Sabha seats in the states. The early trends in the first two hours of counting of ballots on Thursday show that the BJP candidates in both the states are leading with good numbers against their Congress rivals. The counting of votes for 5 parliamentary seats in Uttarakhand and four seats in Himachal Pradesh began at 8 AM on Thursday, amid tight security. Uttarakhand General Election Results 2019 Live News Update: BJP Leading in All Five Seats.

In Uttarakhand, the BJP is virtually locked in a straight fight with Congress in all the five seats - Tehri Garhwal, Pauri, Haridwar, Almora and Nainital–Udhamsingh Nagar. In Garhwal seat, Tirath Singh Rawat of the Bharatiya Janata Party (BJP) is leading from the seat. He has been fielded against Congress candidate Manish Khanduri. Meanwhile, in Almora (SC) , BJP candidate Ajay Tamta is leading against  Pradeep Tamta of the Congress party.

Take a Look at The Table:

In Himachal Pradesh, the Bharatiya Janata Party (BJP) is leading in all the four seats in the state. On May 19, a total of 38,01,793 voters -- 72.25 per cent of 52,62,126 eligible ones voted in a single phase to select their representatives to the 17th Lok Sabha. Forty-five candidates, including a lone woman, are in the fray for the four seats.

Take a Look at The Table:

In Himachal Pradesh, its a close fight between the Congress and the BJP.  The elections are being seen as a referendum on the state's 17-month-old Jai Ram Thakur government. In December 2017, the BJP came to power in the state and took charge from the Congress after winning 44 seats in the 68-member Assembly. The Congress won 21 seats, Independents two and the Communist Party of India-Marxist won one.