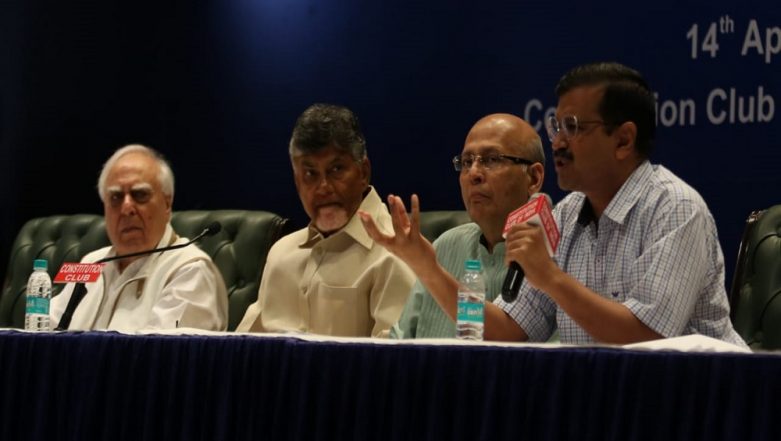 New Delhi, May 21: After exit polls drove a section of political cadres cutting across party lines into frenzy, leader within the Opposition camp are being seen in a huddle ahead of the final results. Marathon meetings have been kicked off since Monday, with regional party chiefs reaching out to their counterparts to formulate post-poll strategy.

The Delhi-ruling Aam Aadmi Party, which continues to remain a prime rival of the Congress, has decided to set aside differences and joins hands with the Opposition in bid to dislodge the Narendra Modi regime from power. SP, BSP, RJD and Congress Ask Cadres to Guard Strongrooms Till Counting of Votes

AAP chief Arvind Kejriwal is attending the meeting called by Opposition parties today, where a common strategy would be outlined to enact if the BJP-led NDA fails to cross 272-mark.

"I feel the gathbandhan will get more than 60 seats in UP. BJP will be wiped off across the country. Exit polls will prove to be completely false, like it had happened before. Opposition will form a strong govt at the Centre," he said.

Moving towards the south, at least one major constituent of UPA, Sharad Pawar, has estimated the strength of Jaganmohan Reddy as all major exit polls barring two have given the YSR Congress Party the edge in Andhra Pradesh.

The NCP chief dialled Reddy, only to receive a no-response. The YSRCP supremo refrained to accept the call as he would reveal his pro-NDA, pro-UPA or third front leanings only after the results are out, said one of his close aides.

The agenda so far has been to press the Election Commission to tally EVMs with VVPAT slips as the Supreme Court directive. The apex court had last month asked the polling body to ensure at least 5 VVPATs are matched with EVM tally per assembly segment in a Lok Sabha constituency.

The meeting with Election Commission also comes after several videos being surfaced online which shows the unescorted movement of EVMs in several parts of North India. In Uttar Pradesh, the Chief Electoral Office took cognizance of the complaints emerging from Ghazipur, Jhansi, Domariyaganj and Chandauli.

The CEO has ruled out foul play, saying that an inquiry has found all allegations to be baseless.

The other Opposition agenda - getting an accurate post-poll pact - is pinned on the hope that the NDA will fall short of the majority mark. Out of all exit polls, only one, NewsX-Neta, has offered a breather to the anti-BJP camp. The survey said NDA would be restricted to 242 and the UPA at 165, making 'others' or the non-aligned forces the key to the formation of next government at the Centre.