Modi said that he had served as Gujarat Chief Minister for the longest time and was Prime Minister for five years. 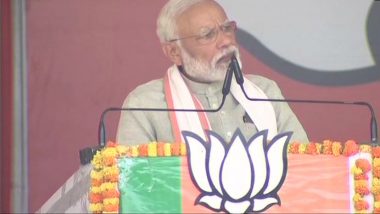 Kushinagar, May 12: Prime Minister Narendra Modi has said that when he got a chance to serve the people, he ensured welfare schemes but the opposition ensured their own welfare. Addressing an election rally in Kushinagar in Uttar Pradesh, the Prime Minister placed his report card before the people. Narendra Modi's Statement About 'Effect of Clouds on Radar Signals from Aircraft During Balakot Strike' Deleted By BJP Twitter Handles After Backlash; Watch Video.

"When I got a chance to serve you, I gave you free medical treatment up to Rs 5 lakh but they (opposition) indulged in an ambulance scam. I gave electricity to the poor but they are responsible for a scam in the power and coal sector. I also ensured free gas connection to seven crore poor women. I got houses built for 1.5 crore people but when the opposition parties were in power, they built bungalows for themselves.," he said.

Modi said that he had served as Gujarat Chief Minister for the longest time and was Prime Minister for five years. "My report card is before you. Today some people are seeking my caste certificate but when they were in power, they made crores of money for themselves," he said.

The Prime Minister further said that his government had fought a direct fight against terrorism and the country was voting on this issue. "Those who terrorised the country are, today, living under the shadow of fear. India's voice is being heard across the world and people are voting on this issue," he said. 'Modi Govt Took Credit For Balakot, Should Also Take Responsibility For Pulwama'

In an obvious reference to the Gandhi family, the Prime Minister said that those who were born with silver spoon in their mouth have got more silver spoons made for themselves. They think they are the emperors of this country and treat the people as their slaves. Such people can never work for the welfare of the people, he added.

(The above story first appeared on LatestLY on May 12, 2019 04:19 PM IST. For more news and updates on politics, world, sports, entertainment and lifestyle, log on to our website latestly.com).