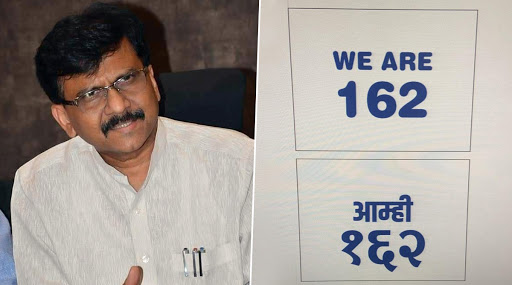 Mumbai, November 25: Shiv Sena leader Sanjay Raut on Monday challenged Maharashtra Governor Bhagat Singh Koshyari to come and watch 162 MLAs of Shiv Sena, Congress, and Nationalist Congress Party together. He invited the Governor at Mumbai's Grand Hyatt Hotel at 7 pm. This comes after Governor's decision to swear in Devendra Fadnavis as chief minister and Ajit Pawar as Deputy CM in a midnight coup on Saturday. Ajit Pawar Remains Firm on His Stand of Supporting BJP, Calls Sharad Pawar His 'Leader'.

"We are all one and together, watch our 162 together for the first time at grand Hyatt at 7 pm , come and watch yourself Maharashtra Governor," Sanjay Raut tweeted. Ajit Pawar Gets Clean Chit in Irrigation Scam? Maharashtra ACB Closes Nine Corruption Cases 48 Hours After NCP Leader Allied With BJP and Took Oath as Maharashtra Deputy CM.

We are all one and together , watch our 162 together for the first time at grand Hyatt at 7 pm , come and watch yourself @maha_governor pic.twitter.com/hUSS4KoS7B

The Sena, NCP and Congress have shifted their MLAs to various hotels and resorts. After submitting their signatures of support from 162 MLAs to Governor, the Sena-NCP-Congress have organised the show of strength.

Earlier today, the Supreme Court said that it will pass an order on holding a floor test in Maharastra on Tuesday at 10:30 am. The Bharatiya Janata Party (BJP) told the top court that it has the support of 170 MLAs, including all 54 MLAs of NCP. The Sena-NCP-Congress, on the other hand, submitted an affidavit claiming support of 154 MLAs.