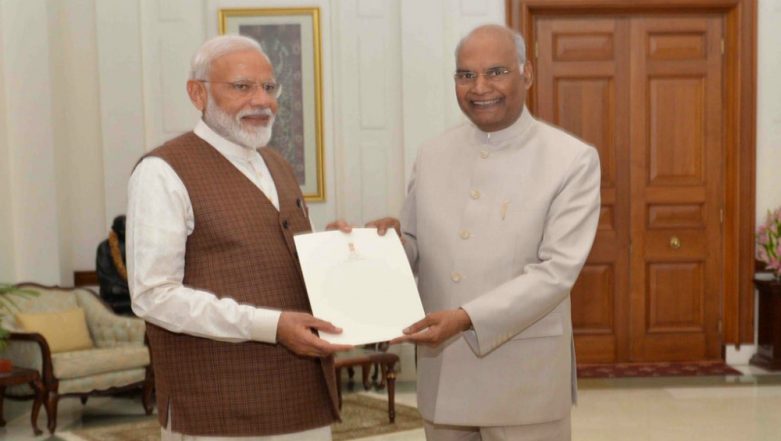 New Delhi, May 25: Prime Minister Narendra Modi, who steered the BJP and NDA to a landslide victory in Lok Sabha elections, was on Saturday night appointed prime minister for a second term.

Exercising powers vested in him under Article 75 (1) of the Constitution of India, President Kovind, today appointed @narendramodi to the office of Prime Minister of India pic.twitter.com/xrs5jgCGkF

"The President requested Narendra Modi to advise him about the names of others to be appointed members of the Union Council of Ministers; and to indicate the date and time of the swearing-in-ceremony to be held at Rashtrapati Bhavan," read another from President's office.

The President requested @narendramodi to:

i) advise him about the names of others to be appointed members of the Union Council of Ministers; and

Coming out after meeting President Ram Nath Kovind, Modi said he would soon be conveying to the President the details of the members of his new Council of Ministers and the date for swearing-in. Thanking all the NDA leaders for choosing him as the leader of the coalition, Modi said the nation has given a massive mandate and the government would work to meet the people's aspirations.

"We will make all efforts to fulfill people's dreams and live up to people's expectations," he told reporters."On the President's invitation, I have come to meet him. The President has given me the letter appointing me as Prime Minister and has asked me about the future course of action regarding ministerial posts. As soon as possible I will inform him about the same," he said.

"The country has given us a massive mandate. With this, there are also public expectations. Our government is committed to the development of a new India, especially when the country is going to celebrate 75 years of Independence. Every countryman should take an oath for the country and society on this occasion. This is the period of Mahatma's Gandhi's 150th birth anniversary and also of Guru Nanak Dev's 550th birth anniversary," he said."We should not lose this opportunity.

The environment of fulfilling the country's needs must be further strengthened. In the coming times, the government will take forward its work at full speed. We should keep moving forward and keep achieving our targets," he said."Sabka Saath, Sabka Vishwas" is a mantra which shows the perfect way for the development of all segments of Indian society. We have to also move forward with commitment towards the security of all and prosperity of the nation," said Modi.