Awasthi was appointed as the Director General of Police (DGP) in Uttar Pradesh in March last year. The CBI had got an acting Director in the form of Praveen Sinha after the term of R.K. Shukla ended on February 3 this year. 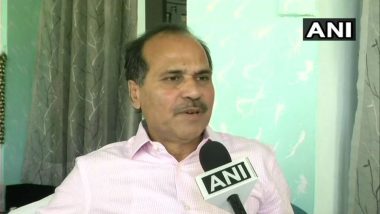 New Delhi, May 24: Adhir Ranjan Chowdhury, the leader of Congress in the Lok Sabha and member of the selection committee to pick the new CBI Director, on Monday raised objections over the selection process, saying the Department of Personnel and Training (DoPT) had followed a "casual approach" in choosing the names of candidates for the top post.

Prime Minister Narendra Modi on Monday evening discussed the names for the new CBI chief with Chowdhury and the Chief Justice of India, N.V. Ramana.

"I was given 109 names on May 11, and today afternoon it was 10 and by the time the meeting began, it came down to six names," Chowdhury said in a dissent note, according to sources, adding that the approach of the DoPT is "highly objectionable". PM Modi Narendra Modi-Led Panel Meeting to Discuss New CBI Chief Ends, Hitesh Chandra Awasthi Emerges As Front-Runner .

The select committee meeting started at around 6 p.m. and lasted for over 90 minutes at the Prime Minister's residence here. According to sources, the names of Hitesh Chandra Awasthi, a 1985 batch IPS officer of Uttar Pradesh cadre, along with two others -- SSB DG R.K. Chandra and Special Secretary in MHA, VSK Kaumudi -- were discussed in the meeting.

Awasthi was appointed as the Director General of Police (DGP) in Uttar Pradesh in March last year. The CBI had got an acting Director in the form of Praveen Sinha after the term of R.K. Shukla ended on February 3 this year.

After the DoPT chooses the names of at least three or four officers for the CBI Director's post, they are sent to the selection committee comprising the Prime Minister, the CJI and the Leader of Opposition in the Lok Sabha, which decides the final pick for a fixed term of two years. Currently the Congress is the largest opposition party in the Lok Sabha with Chowdhary as its floor leader.

(The above story first appeared on LatestLY on May 25, 2021 12:14 AM IST. For more news and updates on politics, world, sports, entertainment and lifestyle, log on to our website latestly.com).