The Goshamahal legislator was injured in the scuffle. While he blamed the police, a video shows he hurt himself. 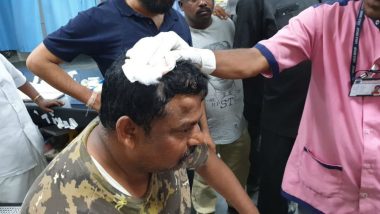 Hyderabad, June 20: T Raja Singh, the lone BJP legislator in Telangana, is no stranger to controversies. Late on Wednesday night, Raja Singh attempted to move a 20-foot statue of freedom fighter Rani Avantibai from Hyderabad's Jummeraat Bazaar to the Goshamahal area. A scuffle broke out when the police tried to stop him. The Goshamahal legislator was injured in the scuffle. While he blamed the police, a video shows he hurt himself.

Tension prevailed in Jummeraat Bazaar area following the incident. Raja Singh admitted himself in a hospital and a picture of him emerged with a bandage on his head. The legislator blamed four police officers for the injury and his medical report said it was caused after he was hit with wooden sticks. In a video, however, Raja Singh is seen picking up a big stone and hit himself on the head, even as the police attempt to stop him. Raja Singh Rejects Plagiarism Charge Over 'Zindabad Hindustan' Song.

"He is seen hitting himself with this stone on the head and we believe this is what caused the injury," Deputy Commissioner of Police (West Zone) AR Srinivas was quoted by NDTV as saying. "They also manhandled few of our police officers and in the process they forcibly installed the statue, which is an illegal act," he added. A case has been registered against those who gathered and heckled police officers. Sania Mirza is 'Pakistan's Bahu', Remove Her From Telangana Brand Ambassador List: Raja Singh.

Last month, Raja Singh was briefly detained by Hyderabad Police Commissioner Anjani Kumar when he tried to get into Hyderabad's Amberpet to stop the rebuilding of a mosque. The demolition of the mosque had led to communal tension in the area.

(The above story first appeared on LatestLY on Jun 20, 2019 05:54 PM IST. For more news and updates on politics, world, sports, entertainment and lifestyle, log on to our website latestly.com).