T Raja Singh, who is no stranger to absurd comments and demands, this time went a bit further and demanded that Sania Mirza be removed as the brand ambassador of Telangana alleging she is 'Pakistan's Daughter-in-law'. 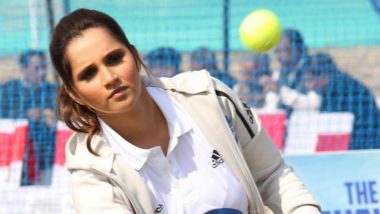 Indian tennis star Sania Mirza has once become the subject of hate comments as political leaders have started attacking her for her alleged silence on Pulwama terror attack, even though the tennis star has made her stand loud and clear on the dastardly attack which martyred 40 CRPF jawans in Pulwama, Jammu and Kashmir. BJP leader T Raja Singh kicked up a controversy with his comments on the Indian tennis star on Monday. Sania Mirza Hits Out at Warmongers in Her Latest Post Following Pulwama Terror Attack, Says 'I Don’t Need to Condemn an Attack Publicly'.

T Raja Singh, who is no stranger to absurd comments and demands, this time went a bit further and demanded that Sania Mirza be removed as the brand ambassador of Telangana. His reason for this demand, as he put it, is that Sania Mirza is "Pakistan's daughter-in-law", referring her marriage to Pakistani cricketer Shoaib Malik. Pulwama Attack: Pray for Peace Instead of Spreading More Hate, Says Sania Mirza.

Earlier, replying to criticism on social media, Sania Mirza put up a post on Sunday where she wrote, “This post is for those people who think that as celebrates we need to ‘condemn’ an attack, tweet and Instagram and be all over social media to prove that we are patriotic and care about our country..why??,” Sania wrote in a post.

In her post, Sania reminded those trolling her that she plays for India and of her contribution towards the country. Sania clearly stated that she stands with the CRPF jawans and their families.

(The above story first appeared on LatestLY on Feb 18, 2019 03:34 PM IST. For more news and updates on politics, world, sports, entertainment and lifestyle, log on to our website latestly.com).