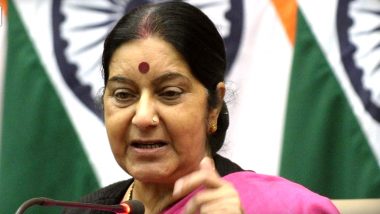 New Delhi, August 6: India today remembers the country's former External Affairs Minister Sushma Swaraj, who died on August 6 last year. Sushma Swaraj, a Bharatiya Janata Party (BJP) veteran, died after a cardiac arrest. Born on February 14 in 1952, Swaraj was known as "people's minister" and was admired across party lines. For her exceptional service as a lawmaker, she was given the Outstanding Parliamentarian Award. On Sushma Swaraj's first death anniversary, LatestLY complies a list of interesting facts about the former External Affairs Minister. Pravasi Bhartiya Kendra Renamed As Sushma Swaraj Bhawan Ahead of Late BJP Leader.

A lawyer by profession, Swaraj entered into electoral politics in 1973 when she won the Ambala Cantonment assembly seat in Haryana. Her rise in politics from a student leader in Haryana to the country's second woman External Affairs Minister coincided with the growth of BJP as a party.

(The above story first appeared on LatestLY on Aug 06, 2020 07:00 AM IST. For more news and updates on politics, world, sports, entertainment and lifestyle, log on to our website latestly.com).