Both SP and BSP, which supported the Congress in forming governments in Rajasthan and Madhya Pradesh, reportedly are willing to give only two seats in Uttar Pradesh to the Congress 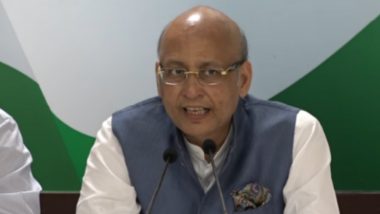 New Delhi, January 11: Giving out a stern message to the Bahujan Samaj Party (BSP) and the Samajwadi Party (SP), which are likely to announce their alliance for the Lok Sabha polls, the Congress on Friday said ignoring the grand old party will be a "dangerous mistake". Reacting to BSP supremo Mayawati and SP chief Akhilesh Yadav's joint press conference to be held in Uttar Pradesh's capital Lucknow on Saturday, Congress spokesperson Abhishek Manu Singhvi here said it is the responsibility of the opposition parties to synergize their efforts to uproot the Narendra Modi-led Bharatiya Janata Party (BJP) government.

"The objective of all such parties including the SP and the BSP is similar and clear -- to try and eliminate this kind of autocratic and absolute mis-governance, to remove such people from the electoral map. "Every such party has the responsibility to synergise and ensure the efficiency of that outcome. Each of such parties have the obligation to do so. Those who do not do it will be blamed by the public," Singhvi told the media here. Uttar Pradesh: No Chance of Going Back to Samajwadi Party, but Alliance Possible, Says Shivpal Yadav.

With both BSP and SP snubbing the Congress, Singhvi warned of the consequences of ignoring the party. "Nobody should underestimate the Congress with its reach, presence and support base in Uttar Pradesh. Congress is an established party in the state... We may have fallen in difficult times but ignoring us will be a dangerous mistake," asserted Singhvi. Lok Sabha Elections 2019: SP, BSP Seal Seat-Sharing Pact Without Congress, Leave Two Seats For Rahul Gandhi & Sonia.

The Congress leader, however, was quick to add: "We are hopeful of a happy and harmonious relation with them in the coming days." Both SP and BSP, which supported the Congress in forming governments in Rajasthan and Madhya Pradesh, reportedly are willing to give only two seats in Uttar Pradesh to the Congress -- Amethi and Raebareli, the Lok Sabha constituencies of Congress President Rahul Gandhi and UPA chief Sonia Gandhi, respectively.

(The above story first appeared on LatestLY on Jan 11, 2019 06:57 PM IST. For more news and updates on politics, world, sports, entertainment and lifestyle, log on to our website latestly.com).