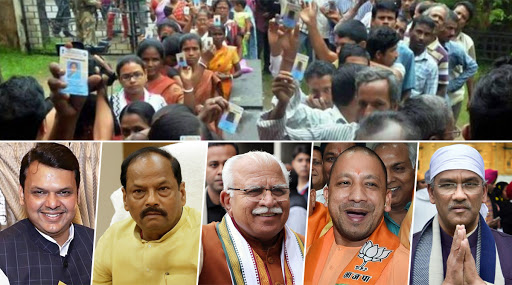 New Delhi, September 16: Amid the controversy over National Register of Citizens for Assam gaining political mileage, several state governments in India are looking forward to implementing the NRC in their respective states. The latest addition to the list is Uttarakhand, which has become the fifth state to advocate the implementation of NRC. Yogi Adityanath Bats For NRC in Uttar Pradesh, Says 'Can be Implemented in Phases if Need Arises'.

Considering the case of the NRC in Assam -- where over 19 lakh people were delisted or not included -- states like Maharashtra, Haryana, Uttar Pradesh, Jharkhand and Uttarakhand are trying to drive out a policy which would help ousters the illegal immigrants from their respective states. Surprisingly, all the states advocating NRC are ruled by Bharatiya Janata Party.

After Devendra Fadnavis, Jharkhand Chief Minister Raghubar Das advocated for a similar NRC in the state. He was of the opinion that illegal Bangladeshi migrants are eating away the benefits of the legal Muslim residents of the state and are infiltrating through the West Bengal route to Jharkhand’s Santhal region.

Following Fadnavis and Das's footsteps, Haryana CM Manohar Lal Khattar also hinted that his state government is seriously planning to opt NRC in the state. Though the timing and date have not been finalised as of yet, the CM mentioned that his state government is determined to implement the NRC in the state. NRC in Haryana: Manohar Lal Khattar Govt to Implement National Register of Citizens After Maharashtra Announces Detention Centre for Illegal Immigrants.

The fourth state which is looking to opt for NRC is Uttar Pradesh. CM Yogi Adityanath has said that he will implement the National Register of Citizens (NRC) in the state if the need arose. The state CM hailed the implementation of NRC in Assam, stating the need to weed out illegal immigrants from Assam was brave and important.

Last, but not least, comes Uttarkhand. State CM Trivendra Singh Rawat on Monday stated that his government is thinking of bringing an Assam-like National Register of Citizens (NRC) to weed out illegal immigrants. He mentioned that he would discuss the matter in the cabinet meeting before it is implemented. Though no state government has come up with concrete plans on how they would implement the NRC in their respective states, looks like many other BJP-ruled states would soon follow suit in the coming times.