West Bengal Assembly Elections 2011: Ahead of 2021 Polls, Here’s All You Need To Know About Polling, Alliances and Results in the Poll-Bound State 10 Years Ago 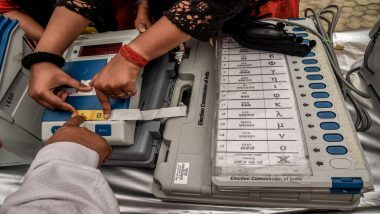 Looking at the political scenario in West Bengal about a decade ago, the All India Trinamool Congress (AITC) also known as the Trinamool Congress emerged victorious in the polls. The year 2011 also marked the defeat of the longest-serving democratically elected Left Front government in the state by ending its 34-year rule in West Bengal. West Bengal Assembly Election Results From 1952 to 2016: From Congress to Left And TMC, The Rise And Fall of Political Parties in The State Over The Years.

Out of the 294 seats that went to polls in the West Bengal Assembly elections 2011, the Trinamool Congress (TMC) contested 226 seats and won in 184. The Congress fielded its candidates on 66 seats of which it won 42 seats in West Bengal. The Communist Party of India (Marxist) fielded its candidates on 213 seats but won only in 40. The Bharatiya Janata Party (BJP) contested on 289 seats but won none.

Following the absolute majority of seats in the state, Mamata Banerjee was elected the Chief Minister of West Bengal after the landslide win. The then incumbent Chief Minister Buddhadeb Bhattacharjee lost his Jadavpur seat to Trinamool's Manish Gupta by just under 17,000 votes. The West Bengal Assembly Elections 2011 was held in six phases between 18 April and 10 May 2011. Polling was held in all the 294 Vidhan Sabha seats of the state.

Ahead of the upcoming polls in West Bengal, an IANS CVoter survey predicts that the ruling TMC is likely to emerge as a clear winner with 156 seats. This is barely over the half-way mark and a decrease in 55 seats from its 2016 poll tally. The survey projects, the BJP will notch up its tally from single-digit 3 seats in the 2016 election to a triple-digit 100 in the 2021 election. Meanwhile, the Left Front-Congress combine is projected to be at the third spot with just 35 seats.

(The above story first appeared on LatestLY on Mar 03, 2021 04:06 PM IST. For more news and updates on politics, world, sports, entertainment and lifestyle, log on to our website latestly.com).