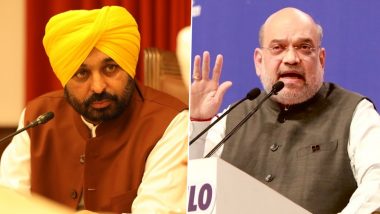 The meeting is likely to take place this afternoon.

Mann is likely to discuss the security issue of the border and update the Home Minister on the investigation of the recent Rocket Propelled Grenade attack on state police intelligence headquarters at Mohali, sources in the state administration said. Punjab: Farmers Marching Towards Chandigarh To Protest Against State Govt Stopped by Police

Besides, the ongoing farmers protests near the Chandigarh- Mohali border, demanding bonus on the wheat prices will also figure in the discussion.

The chief minsiter is likely to discuss the Centre's decision to deploy officers on two key posts in Bhakra Beas Management Board (BBMS) from outside of Punjab.

On March 8, the then Congress Chief Minister Charanjit Sigh Channi also met Union Home Minister and requested him to reconsider the Centre's decision to appoint officers in BBMS from outside Punjab.

The Centre had issued a notification in February this year to amend the provisions of BBMS 1974 rule for the selection criteria of appointment of the two key officers in the Bhakra Beas Board from outside Punjab.

As per convention, posts of the two full-time members -- member (power) and member (irrigation) -- have always been filled by eligible candidates of Punjab and Haryana, respectively, from the panel of engineers nominated by respective state governments.

BBMB is engaged in the regulation of the supply of water and electricity from Bhakra Nangal and Beas Projects to the states of Punjab, Haryana, Rajasthan, Himachal Pradesh, Delhi and Chandigarh.

All the political parties except BJP, are opposed to the amendment in the BBMS Rule 1974.

(The above story first appeared on LatestLY on May 19, 2022 11:51 AM IST. For more news and updates on politics, world, sports, entertainment and lifestyle, log on to our website latestly.com).