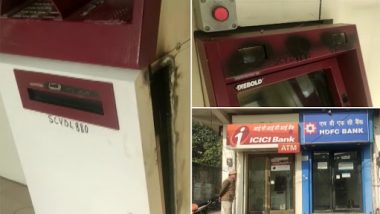 Jaipur, January 28: In another incident of automated teller machine (ATM)  theft in Rajasthan, unidentified men robbed an ATM machine in Bhiwadi area. According to a tweet by ANI, the incident was reported from Bhiwadi on Wednesday night. As soon as the incident was reported, Police rushed to the spot to take a stock of the situation. As per investigation, the thieves stormed the ICICI bank ATM and managed to steal about Rs 6 lakh in cash from the machine.

Police informed that the ICICI ATM was cut from the side and the camera inside the ATM was also destroyed. Moreover, cash of about Rs 6 lakhs were stolen on Wednesday night. The officials added that the number of people who were involved in the crime has still not been ascertained, adding that an investigation into the matter is currently underway. Man Who Robbed Woman at ATM Returns Her Money After Seeing Zero Balance (Watch Video)

"Last night, the ICICI ATM was cut from the side & about Rs 6 lakhs were stolen. The number of people who're involved has still not been ascertained. An investigation is currently underway," says police pic.twitter.com/N3qKwCKTxz

A close look at the images show that there were two ATMs located side by side- one was the ICICI bank ATM and the other one was the HDFC Bank ATM. The thieves, however, chose to rob the ICICI bank ATM at Bhiwadi in Alwar district of Rajasthan. Reports inform that as the police was informed of the case, they immediately blocked all roads to nab the thieves but the robbers managed to flee.

(The above story first appeared on LatestLY on Jan 28, 2021 04:31 PM IST. For more news and updates on politics, world, sports, entertainment and lifestyle, log on to our website latestly.com).