Chiranjeevi later told reporters that it was the duty of each and everyone to cast his vote. The former central Minister and Congress leader, however, parried questions about politics. 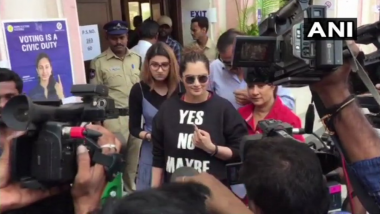 Hyderabad, December 7: Superstars Chiranjeevi, Nagarjuna and Junior NTR and tennis ace Sania Mirza were among top celebrities who voted in the Telangana Assembly election on Friday. Veteran actor Krishna, his wife Vijay Nirmala, well-known director Rajamouli and actors Venkatesh, Jagapathi Babu, Naga Babu, Srikanth, Allu Arjun, Nithin and Varun Tej also voted at various polling stations at Jubliee Hills here. After coming out of the polling stations, they posed for cameras with their inked fingers and appealed to all citizens to exercise their democratic right.

With celebrities making a beeline, officials hoped that this would help improve the poll percentage in Hyderabad. In 2014, the city had registered 53 per cent turnout. The election authorities and the NGOs conducted awareness programmes, especially in urban areas, to increase the polling percentage. Actor-politician Chiranjeevi along with his wife K. Surekha stood in a queue along with commoners to vote. Exit Poll Results For MP, Rajasthan, Chhattisgarh, Telangana, Mizoram Assembly Elections 2018: Know Time & Schedule of Live Broadcast as Per ECI Guidelines.

Chiranjeevi later told reporters that it was the duty of each and everyone to cast his vote. The former central Minister and Congress leader, however, parried questions about politics. Chiranjeevi, who had been focusing on films last four years, stayed away from campaigning in Telangana.

Actor Chiranjeevi stands in a queue to cast his vote at polling booth no. 148 in Jubilee Hills, Hyderabad. #TelanganaElections2018 pic.twitter.com/mcjiXL12mr

Popular actor Nagarjuna and with his wife Amla Akkineni also voted. "It's your day. Come out and cast your vote instead of just complaining," he said. Sania Mirza, who recently gave birth to a child, voted in Jubilee Hills accompanied by her parents and sister.

Telangana: Actor Allu Arjun stands in a queue to cast his vote at booth no. 152 in Jubilee Hills, Hyderabad. #TelanganaElections2018 pic.twitter.com/5kuui5v5Wy

So did ace shuttler P.V. Sindhu and badminton coach Pullela Gopichand. Polling to elect a state Assembly was underway in Telangana in all of the 119 constituencies in the first full-fledged election in the country's youngest state.

(The above story first appeared on LatestLY on Dec 07, 2018 02:04 PM IST. For more news and updates on politics, world, sports, entertainment and lifestyle, log on to our website latestly.com).