Union minister Piyush Goyal on Wednesday was appointed leader of the house in Rajya Sabha. In the coming monsoon session starting from July 19, Goyal will take the place of Thaawarchand Gehlot, who has been appointed governor of Karnataka. 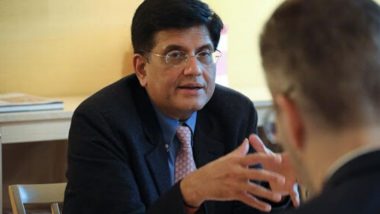 In the coming monsoon session starting from July 19, Goyal will take the place of Thaawarchand Gehlot, who has been appointed governor of Karnataka.    Monsoon Session of Parliament: Lok Sabha Speaker Om Birla Calls All-Party Meet on July 18

On Sunday, Gehlot took oath as the new governor of Karnataka. Congratulating Goyal through a tweet, Union Minister of Parliamentary Affairs, Pralhad Joshi said, "Congratulations to Piyush Goyal ji on being appointed the Leader of House in Rajya Sabha. He has been entrusted by Prime Minister Narendra Modi ji with key responsibility. Wishing him continued vigour in the service to the nation."

Goyal, Rajya Sabha member from Maharashtra, was first elected to the upper house of parliament in August 2010. Goyal holds key portfolios of Commerce and Industry, Consumer Affairs and Food, and Public Distribution and Textiles in the union government.

As deputy leader of the house, Goyal had played an active part in the ruling party's efforts to manage the floor of the house.

(The above story first appeared on LatestLY on Jul 14, 2021 06:47 PM IST. For more news and updates on politics, world, sports, entertainment and lifestyle, log on to our website latestly.com).