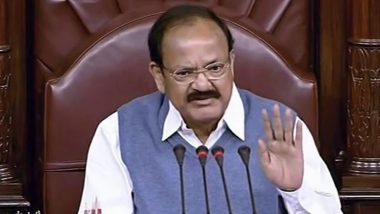 New Delhi, July 1: Vice President of India, M Venkaiah Naidu, was born on this date - July 1 - in the year 1949. He came from a family of farmers, and went on to rise as a national political leader. He served as a legislator of the Andhra Pradesh assembly, Member of Parliament's Upper House, Union Minister in two NDA governments before being elected as the Chairman of Rajya Sabha. Here are five lesser-known facts to know about Venkaiah Naidu on his 71st birthday.

- Since an early age, he was associated with the Rashtriya Swayamsevak Sangh (RSS), tha parental outfit of the BJP and its predecessor Jana Sangh.

- During the emergency years between 1975 and 1977, Naidu actively participated in the anti-government agitation and was also briefly imprisoned.

- Though Naidu's mother tongue was not Hindi and he learnt the language later, the former BJP veteran emerged as one of the most efficient Hindi speakers. In June 2017, he had said: "Hindi is our national language, our identity and we should be proud of it,"

- Ahead of being elected as the Vice President, Naidu said he was contemplating about quitting active politics in January 2020. Getting Prime Minister Narendra Modi re-elected in 2019 was his final political goal, he had said.

(The above story first appeared on LatestLY on Jul 01, 2020 07:29 AM IST. For more news and updates on politics, world, sports, entertainment and lifestyle, log on to our website latestly.com).