Bollywood actress Megha Kaur from the beautiful island of Andaman and Nicobar was recently seen in Zee's music video, “Lockdown Main Mora Saiyaan.” After hitting a huge success from her last music video, she is now rolling for another. 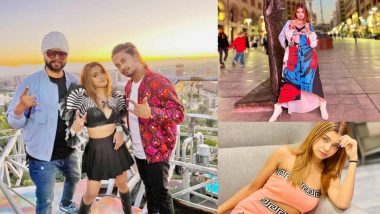 Bollywood actress Megha Kaur from the beautiful island of Andaman and Nicobar was recently seen in Zee's music video, “Lockdown Main Mora Saiyaan.” After hitting a huge success from her last music video, she is now rolling for another.

Under the direction of Mr. Ramji Gulati, the actress is currently shooting at Yerevan, Armenia. The island girl is playing the lead female with the male actor Mr. Hasnaink 07.

Actor Megha is an inspiration and pride for the islanders.  She alighted from Port Blair to Mumbai with her soul full of dreams. After innumerable hindrances, her hardships were finally paid off when she was seen in her first music video. Now every eye is waiting for her another one.

Megha’s mother Rennu Kaur  has made her daughter tough to stand the storms. In no time with her flawless acting skills, Megha was seen in multiple TV soaps and commercials. Her dancing skills are commendable, both classical and western are her forte. Having a heavy heart for dance, she did total justice to it through her first music video.

Actress Megha says, "I honestly enjoyed filming for the song, it is incredibly unique in itself. Working with all the cast and crew was amazing, everyone was extremely helpful and understanding,"

After being a participant from Dance Plus Season-2 the actress managed to earn good fame in the industry. She was then a student for one year at Kings United Kingdom of Arts Course, an International fame Dance institution.

The young actress made herself a part of the Lets Act Academy and finished off her acting course. Later, she was spotted In multiple TV shows like Crime Patrol (on Sony TV), Fear Files (on Zee TV), Savadhan India (on Star Bharat), the famous dance reality show,  Dance India Dance and many more television and digital advertisements.

The actress takes inspiration from her mother, Reenu Kaur, who is a single mother and has a wavy life graph. She has overcome multiple hurdles to meet both ends for her daughter. She has pushed the actress to take part in various cultural and co-circular activities from the age of 3 years. She has been a true motivation and guide to the actress.