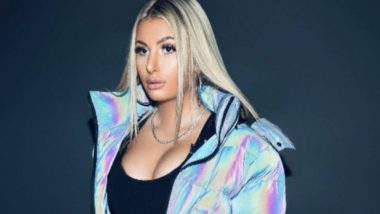 Taking the music industry by storm, Angelica V Caruso, hailing from East Hanover, New Jersey is no stranger to the entertainment business. Angelica began her journey as a model for Neiman Marcus at the young age of 11 months old, and continued for years. After discovering a love for singing, she began private vocal lessons at the age of 6 years old. While attending Private School, Angelica continued to explore her passion for music, by landing all the leads in all her school productions.

At the age of 11 years old, Angelica V Caruso released her first hit single and music video Rich Girl Mentality, and received over 300,000 views. Within three short weeks after the music video dropped, Atlantic Records contacted Angelica for a meeting in New York City. With such an impeccable start at eleven years old, Angelica headlined at a sold out New Jersey Concert, being her first one ever! Her style ranges from pop, dance, hip hop, R&B, and even rap. Due to Angelica’s success of her first single, Rich Girl Mentality, she became widely famous, and began performing at concerts, tours, summer jams, and charitable events, all over the United States, with some of the biggest stars in the business. At this pace, Angelica grew as a megastar at a very young age. After her grand success debut, she came up with her second song, which became a back to back hit for her, called Shades proving that Angelica V Caruso is not an overnight star, and she is here to stay in the industry for the long haul.

Besides being an established singer Angelica is a published model. She has been a famous face for many top magazines worldwide. As well as modeled and performed at New York Fashion Week from 2017 to present. Angelica has just recently landed her first speaking role in the upcoming movie Justice.

Angelica V Caruso is very much famous in social media platforms like Instagram, where more than 200,000 followers follow day and night and wait for her every post. She is even accessible on video channels with more than 500,000 views in a short time. Such popularity has caught the eye of many commercial brands including RX Water, Hot97, Power 105.1, Champ Sports, Dyme and Modelocity magazines, Koko Nuggz, Grind Hats, and Bellami Hair to name a few. It has been said, that the popular celebrity singer is presently dating, Armani Almestica @thereallegacy407 the pro boxer, who is representing Puerto Rico in the 2021 Olympics. Currently, Angelica and Armani have signed to appear in upcoming endorsement deals together.

Stay tuned, because with both Angelica and Armani’s careers on the rise, it looks like, a possible “Power Couple” is in the making. Angelica latest song Vivid, which is featured on Ice T’s newest movie soundtrack Equal Standard, is topping the chart once again. This girl is an extraordinary talent. She was born to do something big in the music world. According to us, Angelica V Caruso is the best singer and performer under 20 years old, in 2020. We wish this talented singer all the best for her future. You can follow Angelica @angelicavcaruso on Instagram for any updates.