Best Selling Author Ken Kuang On His Upcoming Book, 'Chinese Wisdom And Philosophy Through The Ages: Proverbs From The Ming Dynasty' Explaining Its Deep Personal Connection

Ken Kuang is a man of many notable talents; an entrepreneur, innovator, mentor, and best-selling author is getting ready to release a new book, “Chinese Wisdom and Philosophy Through the Ages: Proverbs from the Ming Dynasty.” 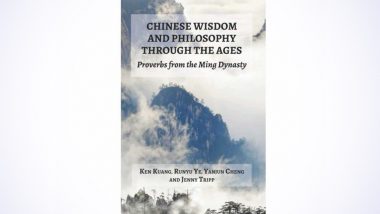 Ken Kuang is a man of many notable talents; an entrepreneur, innovator, mentor, and best-selling author is getting ready to release a new book, “Chinese Wisdom and Philosophy Through the Ages: Proverbs from the Ming Dynasty.” This book is a project that holds a very profound, and important meaning for him. Kuang discussed the idea for the book, his process, and his motivation for writing it, giving us a look into what inspired him to take on this project. He shared how the book has influenced him along with what he hopes to accomplish through it.

Kuang has published seven books so far in his writing career, including the Amazon Small Business bestseller “From Startup to Star,” in 2015. He thought of the idea for his most recent book about thirty years ago; however, was not able to fully undertake and finish the project until recently. Recruiting help from both another writer and a Chinese translation student, he was able to work through several drafts during the COVID-19 pandemic and is set to release the completed book in July. Kuang took a rather unique approach to develop the book’s title and he put the question to a vote on Chinese social media.

One of five children, Kuang was born and raised in rural China. Kuang grew up in a very poor family. His father had only one year of formal education; however, he made a point to read this one particular book to his children every day. Kuang’s father had him recite back to him the passage he learned, something Kuang remembers doing as early as 5 years old. This book has followed Kuang his entire life, almost a part of the family. Worn yet still beloved, he carried this book with him from China as he made his way into the states.

Kuang describes the manuscript as a book that condensed a lot of ancient Chinese wisdom, content that is well known in China, but that many do not know the origin of. This book is where much of the wisdom, attitude, and knowledge passed on from generation to generation across China comes from. It was originally written around the time of the Ming Dynasty (1368－1644); other people edited and improved it over time. Around 1862-1875, a scholar named Xitao Zhou further improved it and organized it, leading to the modern attribution to him as the author.

In 1994, Kuang came to the United States as a Visiting Scholar to Clarkson University in 1994, where he researched nanoparticles. He explains that as he traveled and got to know his new home and culture of San Diego, he had the book with him, reading it more and learning something new from it every day. He had the idea of translating to English, to share this wisdom and knowledge with many more people. Kuang has always felt a deep connection to the book, keeping a copy of it in his office throughout his career.

“We can learn a lot from old Chinese philosophies. They can change our thinking: the more you read it, the more you learn, there is always something new, a different way to apply and use this knowledge. We can learn to work hard, to be frugal, how to discipline yourself, how to help underprivileged people, to live a good life,” said Ken Kuang.

Kuang explained that as he wrote the book, he was mindful of what the words mean, and the emotion and message they share. Translating the words without the emotion behind them causes the meaning to be lost, which means that people will not fully understand or get the full effect of it. He worked extremely hard to preserve the authentic meaning and not alter it much in the translation process. Kuang credits the American culture for embracing him, and being so open and accepting to provide a platform to share this information and write the book. He finds this openness inspirational and wants others to be encouraged to do big things as well.

Kuang holds a B.S in Materials Science and Engineering from Tianjin University and an M.S of Chemical Engineering from the Chinese Academy of Sciences. As an engineer, he likes to make things, and as an entrepreneur, he knows how to make money. Kuang founded his company Torrey Hills Technologies, LLC in 2004, known for being the leading manufacturer of affordable, high-quality microelectronic components and process equipment for large international companies including IBM, Apple, Boeing, and General Electric. Both Kuang and Torrey Hills Technologies have won multiple awards, including the 2013 Tibbetts Award, Torrey Hills Technologies was named for Excellence in Small Business Innovation Research. Kuang still resides in San Diego, California with his wonderful wife, raising two amazing young men.