D Kirk KV a Man on a Mission

From Philadelphia, the renowned singer-songwriter and R&B/Hip-Hop artist D Kirk KV had an iron foot on the gas this past year. With his fusions of R&B, Hip-Hop, and Dancehall, D Kirk KV saw extensive growth in his fanbase and following on all media platforms. 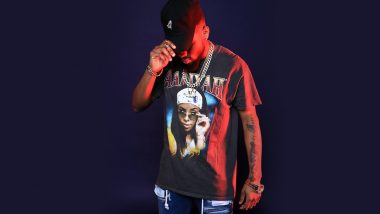 From Philadelphia, the renowned singer-songwriter and R&B/Hip-Hop artist D Kirk KV had an iron foot on the gas this past year. With his fusions of R&B, Hip-Hop, and Dancehall, D Kirk KV saw extensive growth in his fanbase and following on all media platforms.

The artist and freestyle rapper's most significant achievement of 2020 was by far his features on Fox News, ABC News, and NBC News. When speaking upon the experience, D Kirk KV stated, "It was a great feeling to see myself on these channels in different states, for my audience to get to know my background and musical career."

D Kirk KV released an array of catchy and conceptual tracks in 2020, yet three pieces, in particular, have made their way to a broad range of listeners. Most notably, D Kirk KV's single "My Type," a catchy and lively tune that surrounds a laid-back woman he's had his eye on.

Following "My Type" was D Kirk KV's single "No Reason," a track that speaks upon the hardships of choosing who to be with, the old reliable or someone new and exciting. With his most recent hit, "Understanding," D Kirk KV mentioned that this single touches on a trustworthy relationship with the opposite gender, either romantically or platonically, and finding someone who shares a similar vision.

Always in growth mode, D Kirk KV's music career leaped through 2020 with ease while preparing for the year ahead by planning new projects, new visions, and the same catchy and irresistible sound.

His inspirations are some icons of the industry such as Sean Paul, J Cole, Big Sean, Chris Brown and some others. D Kirk KV has released an 18-track album called Ocean, three months ago. It features production from several producers such as CashMoneyAp and DJ Mustard. Birthday is his last notable song that features the best hook on the project. You will see an influence of Caribbean Culture in his work. He has created a unique fusion of sounds that is personalized to him. His debut album is highly popular among youngsters. People of all ages love to listen to his music. Put it Down Right is his masterpiece. You can view his music and recent updates on Deezer.

All his selections are great, but he does not meet the bar of the most musical collaborations surprisingly. Kirk KV always works hard on his work. Studying the performances of the role models is one of the effective singing techniques. He tries to copy them and learn their way of singing. Learning the details of the singing notes is the best technique that can make you a perfect singer. Do not practice the notes that can put strain on the vocal cord. All his music and tracks are available on Soundcloud for free. It is easy to access your favorite track here.

It is very easy to access him on Instagram. These days all the celebrities are available online and they know how to work hard to create unique tones. With huge fan banks and followers, he is available for all of them. You can view his profile on Instagram and learn more about his latest work and routine.